I'm working on my "steal every NTFS" project, again, and doing some diving into Certain Sites for tracking these things to figure out how my code should work, and I ran into some code that seems to be for a c/o/i/n that doesn't exist anymore. so I searched it and... yeah. 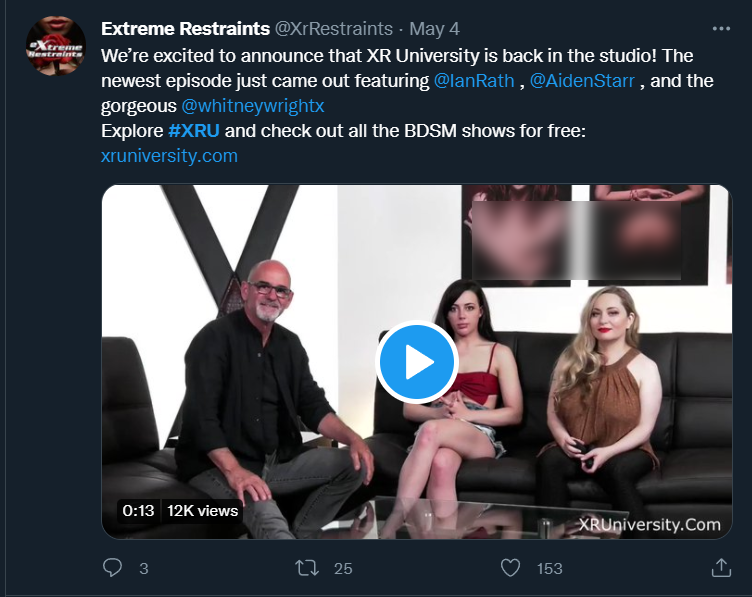 their website is down so I can't check any info on this, but they're only barely a year old at this point. good lord. these are quick scams 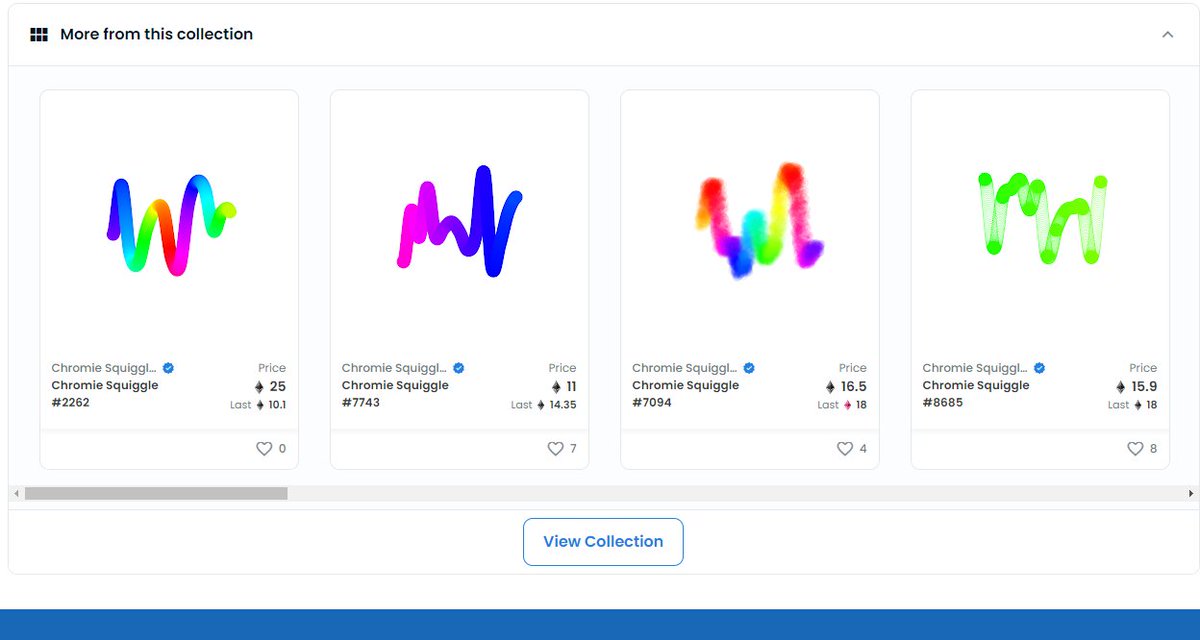 there are problems which are not computable. for those, no turing complete computer can solve them.

the usual example is the halting problem: given a program, determine if it'll halt or run forever.
This problem cannot be generally solved. It's impossible.

anyway this is why the "steal every NTFS" project is going slowly. every time I work on it I get mad at how every part of it is badly designed and intentionally confusing.

I can query all the blocks and get all the transactions and some of those contain the bytecode to the contracts which m/i/n/t the NTFS.
how do I tell which transactions contain contracts?
just disassemble the VM bytecode!

oh sweet yogurt flavored jesus what is this 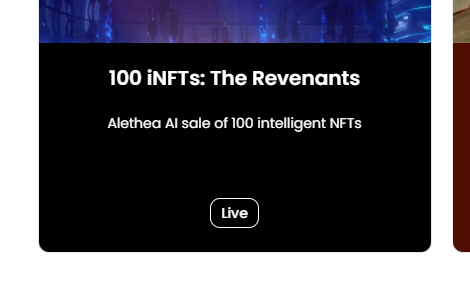 ahh, found this! this may be helpful.
https://github.com/kylemcdonald/ethereum-nft-activity …

god, by that table in the github repo, NTFS alone are emitting CO² equivalent to the generation of about a terawatt of coal power

Every time I look into this it gets weirder. It kinda feels like this is the result of solving every problem bookchaim, even things that aren't problems. Solve them with it anyway.

Like your transactions can have code associated with them, right? That's how the smort contacts work. So you just deploy code for an NTFS, right?

No, don't be silly. You can't just deploy some code that's an NTFS, you instead deploy code that can make NTFS, then you call it in a separate transaction

Except, no, that's not how it works. See, you don't just deploy code into the EthernetPoints ecosystem, you create transactions which include code that deploys your code.

Then you call that, in a separate transaction, to SpearMint your NTFS

Except, I've been looking at these mintings, and it doesn't seem like you call it with all the info you need at start, no. That would be too big or something?

So once you create your NTFS by CoolMinting it by calling a method on the code you deployed code to deploy, you then make more transactions that call methods on it to change the attributes, like SetIpfsImageURL

Each of these transactions is not free, of course.

It's almost like this was designed to require more steps than was needed, solely because it supports the ecosystem as each step has a cost associated with it

Basically at every magnification level this shit is either massively badly designed in a way that results in higher costs for everyone trying to use it, OR it's a scam.

I just wanted to share this because I keep seeing NTFSfans saying things like "you only criticize it because you don't understand it!" and yet the more I learn about it the more I hate everything about it

Also, side note, I suspect some of this bad design is being used to exaggerate how popular NTFS are.
Like you can check the EthernetPoints info sites and look up a major NTFSmonger and see they've had 75,000 transactions

Which sounds like a lot! Clearly people are making and trading and selling these all the time?

Except just making one takes two transactions, since you need to transfer some monopoly money before PepperMinting your NTFS, to pay for the computation involved.

And then it's another two for every attribute update, and you can have maintenance updates that do things like set revenue share, prepare them for selling, etc

Like, on another NTFS account I was looking at, it showed they had around 2000 transactions and as far as I can tell they've only ever sold one NTFS

BTW, you know how I said the code to deploy the code is on the bertchin? Well, that also means that if your code has a bug anywhere, you have to pay to update it!

And if you're a programmer that should sound very unfun.
Sure, you can spin up a testchain and write unit tests and try to confirm it works before you deploy it to the ultimate of hostile environments, but HEY HAVE YOU EVER FOUND A BUG IN PRODUCTION?

And I'm not getting about the ultimate of hostile environments. You're paying to deploy code that everyone can see the byte code of that deals with money.

You automatically have the ultimate in bug bounties, as everyone who finds a problem with your code can use it to steal your NTFS and/or monopoly money.

And they can do that anonymously!

Not kidding, I mean. Not "not getting", autocorrect

It's also a fundamentally nightmarish environment to code for. You have to worry about security while writing bytecode and include maximum flexibility for future use as changing code is expensive and OH YEAH HERE'S THE THING: you're paying by code size. Every byte costs

So you just need to write extremely tiny code that's flexible for future extension and be very paranoid about security because it deals with money.

But don't worry you're, you're just targeting a synthetic vm with a weird word size that you can't run without an entire bankchsmp implementation using ad-hoc tools built by the same group of fools who think any of this is a good idea

Stack machines are known for being simple to code for but this kind of risc code isn't great for code density compared to cisc architectures, which is certainly a nice design choice to make when you're dealing with a system where you PAY PER BYTE OF CODE

My favorite example of the fractally "not invented here" syndrome that appears to be going on in the EthernetPoints ecosystem: the API deals with a lot of hex strings, right? Transaction hashes and block hashes and the like.

So they wrote their own python module for dealing with hex strings.
It's just a wrapper around a bytestring that enforces even length and only 0-9A-F and has a convenience method to convert it to a binary string.

Normal people would just use strings, or look in pypi for existing hex string helper code.
But no, we needed EthernetPointsHexString .py

You know that time when the Enterprise crew were planning to destroy the Borg by introducing into their network a topological anomaly, a geometric figure that couldn't exist in time or space, and would consume all their computing power to try to analyze? 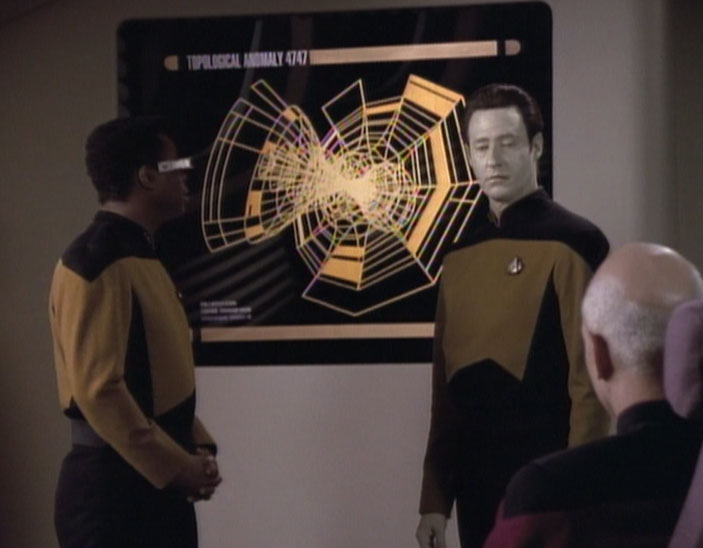 I feel that's a good analogy for all this berkchimp shit. And obviously people think it's just a huge time waste in terms of all the computing power that's just computing hashes to mine new monopoly dollars, but think of the programmer time that's gone into every facet of this

Every corner of this nonsense has a dozen packages designed to do the same meaningless make-work shit.

And yes, to an extent, but usually there's some other thing made or maintained as a side effect

Your code keeps a store able to sell things or makes a game or whatever.
You're not just writing code to cope with the intentionally difficult nature of a fractal scam

This isn't an industry, this is a puzzle. You're supposed to figure this shit out to get a good grade in your Computer Architecture 201 class, not to get actually used by anyone in any kind of real world.

The output would be indistinguishable from the reality of binkchort tech.

And keep in mind, that's coming from a professional retrocomputist who has done coding working for both 4chan and the US Government!
I have seen some serious nightmares of legacy code in my day.

I'm just saying, if all this BontChump stuff isn't a scam, it sure is suspicious how it seems exactly like it's been over complicated and endlessly layered on top of itself with infinite indirection... exactly what you'd do if you wanted to obfuscate and obscure how it works

It also would discourage any uninterested observers from really looking into it. If you're not already on board for the scam, why would you invest all this time into understanding this shit?

Which is going to cut down on the number of unaffiliated people going "hang on this is a scam, everybody. Don't touch it"

The complexity of how it works means that people generally don't look deeply into it themselves, they just rely on what other people say about how it works.
And most of those people bothering to talk about it? Scammers and True Believers.

This is part of why I keep yelling about it: people like to refer to the "crytypo debate" but it's mainly a bunch of positive shit, relatively few people saying it's a scam, and huge gulf in between of people who don't know enough to have an opinion

And that leads directly to the "celebrity is making an NTFS" scam working. Someone on the pro side got to them and they didn't know anything about it and believed the lies

I just want to yell about it enough that more people at least get the impression there IS a debate happening here, and it's not just a New Thing That Some People Like, like it's a new app or social network

And really if I could get one thing across it's that if you get into NTFS, a lot of people will be very mad at you and will yell about it to all their friends and followers.

Because I keep seeing the pattern repeating where the news is "celebrity X is doing NTFS" and then a bunch of people are like "THIS IS TERRIBLE HOW COULD THEY DO THIS" and then quietly a week or two later, they cancel plans for the NTFS

Meanwhile the actual scammers behind this have moved on and are using that original headline as a way to advertise this to celebrity Y. See, Celebrity X is doing it too, don't you want to get in on that money?

All the money ends up in the hands of the scammers, all the backlash ends up at the feet of the celebrity. It's the perfect grift.

I want people to respond to "hey do you want to make money selling NTFS of your work?" with "I don't know, don't a lot of people hate that?" instead of "what's an NTFS?"

Because that's the first step towards the response being "fuck off, scammer. *blocked*", which is the definitively correct response to anything bunkcrank 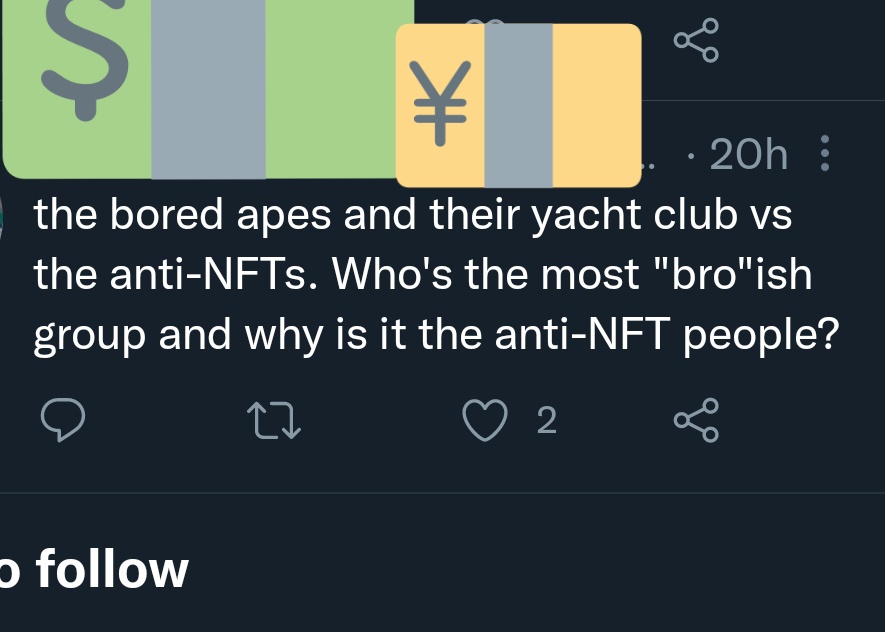