Don't talk to me until I've had my roguelike 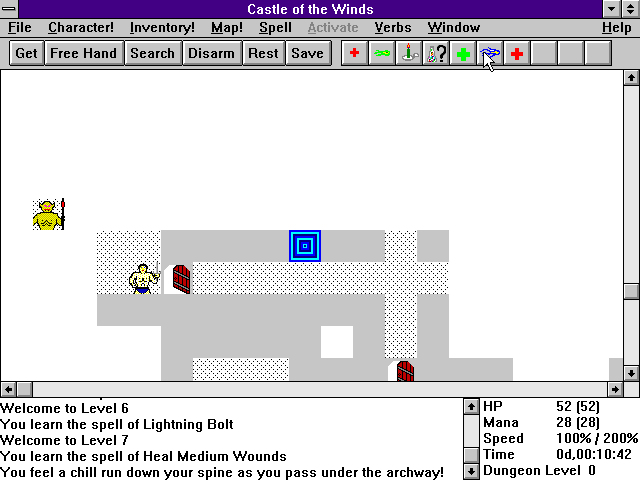 Fun fact: I Google image searches "castle of the Winds" to find this screenshot and one of the first page results is some Foone punk who keeps clogging up my results

Anyway if you want to play it, it's on the internet archive, playable in browser:
https://archive.org/details/win3_CasWin1 …

It's a cute pixel rpg in the FTL genre of "always pushed forward semi-roguelikes", and it uses the win 95-esque UI as a legitimate game element. Like, managing all your bags in the limited screen space is on purpose, and you sometimes have to close popups as a combat technique

Kingsway is also about to have a big update, so it's a perfect time to get into it

Anyway this game (Castle of the Winds, not Kingsway) was originally published by Epic Megagames, so WHERE'S THE EPIC GAMES STORE RELEASE, @EpicGames?

(that makes me wonder: is there any existing mechanism for easily packaging up 16bit windows programs for distribution? Like, we've got lots of DOS games on steam and gog because they just bundle dosbox. Has anyone done the same for like winevdm or win3mu or something?)

Because 64bit windows can't natively run 16bit programs, and there's a couple projects that fix that, but they're all of the format of "install this thing into your OS and now it can run windows 3.1 apps"

Having an option that wasn't system wide, but instead just wraps a single 16bit exe, would be handy for putting old 16bit games up on storefronts

Now you can just run them in dosbox, but I don't see any copies being sold with that solution anytime soon. Dosbox itself doesn't need a copy of DOS to work, so you're not distributing any Microsoft code, so it's not a copyright violation.

Running windows 3.1 in dosbox inherently requires using at least some of windows, so you'd be at risk from Microsoft suing you for distributing their software.

The internet archive gets away with it in their emulation, presumably because they're legally a library, and are only doing it to enable compatibility. They use a very cut down windows anyway, with minimal files distributed.

But what works for them freely making available some software to play in the browser, with the windows components never being saved to your computer, may not work if you want to sell a copy of dosbox with them and your game packed into it

It'd be nice if we could get Microsoft to officially put those minimal windows 3.1 components under some kind of free-to-share license for distributing old programs under dosbox.

But that's probably not going to happen, given their current policy towards that era of windows is to plug their ears and pretend it doesn't exist.

Modern windows could support those programs just fine, it's been proven using THEIR OWN CODE that 16bit apps on 64bit windows is 100% possible, they just don't want to.

Either because of security concerns or they don't think there's enough demand or they're trying to finally kill that backwards compatibility so they don't have to deal with it in future.

But yeah. Right now 16bit windows games are a black hole of unreleaseability.
DOS games have an easy emulator you can bundle, 32bit games still work for the most part, and relatively minor patching can fix the rest.

16bit windows games? Unless you have the source and can rebuild it to be 32/64bit, it's staying unplayable.

That's what happened with SkiFree, btw. The source code still exists so the developer recompiled it for 32bit, allowing it to be played on modern windows.
https://ski.ihoc.net/

Or you can just play the original version in your browser, of course, thanks to the internet archive's dosbox and win3.1 implementation I mentioned.
https://archive.org/details/win3_SKIFREE …

Anyway @OpenAtMicrosoft if you need to hire someone to be in charge of open sourcing/ freewaring your old unsupported software for the good of the entire computing industry, just dm me. I'm available.