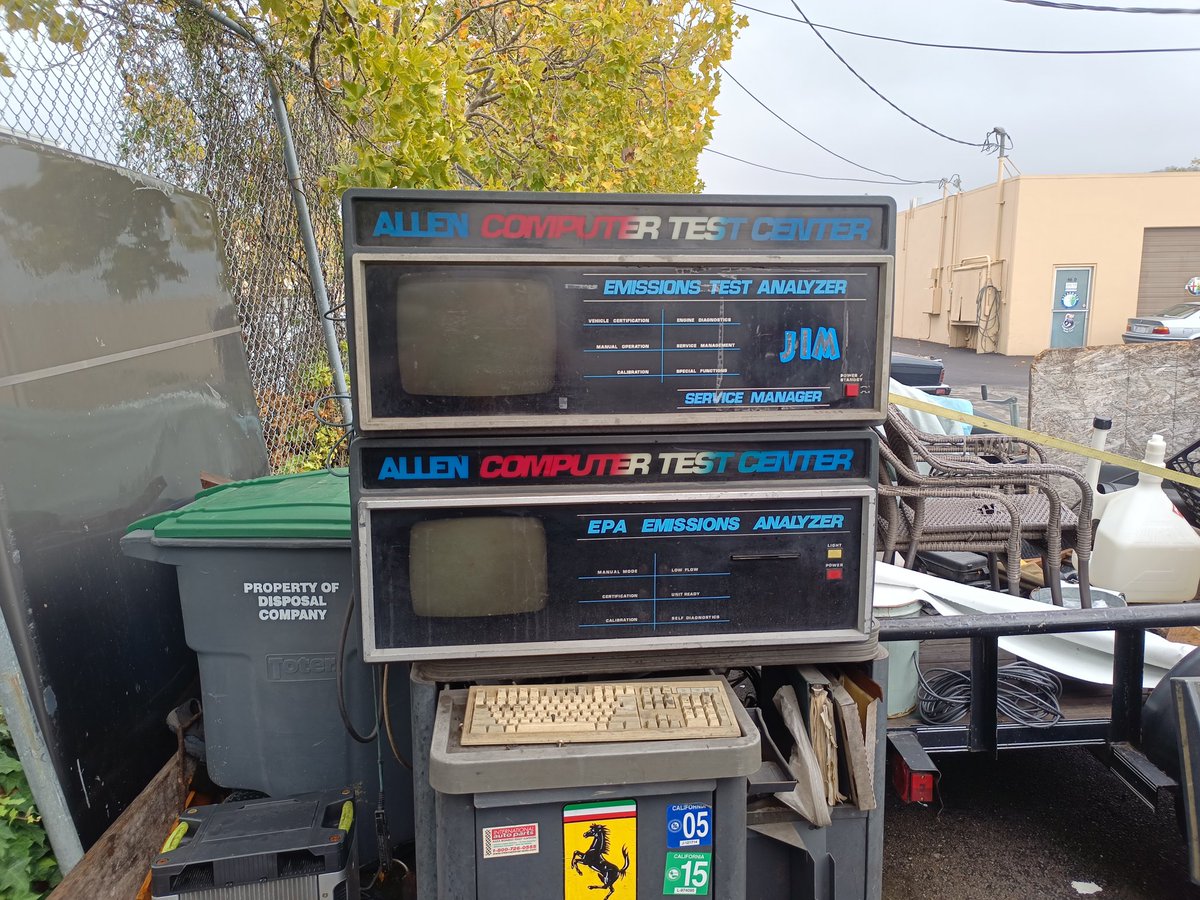 I just got this (minus the bottom part, which is just a stand.)
It's a computerized SMOG tester from sometime in the 80s and it's possibly the dirtiest computer equipment I have ever seen

Yeah I don't think this printer is gonna work 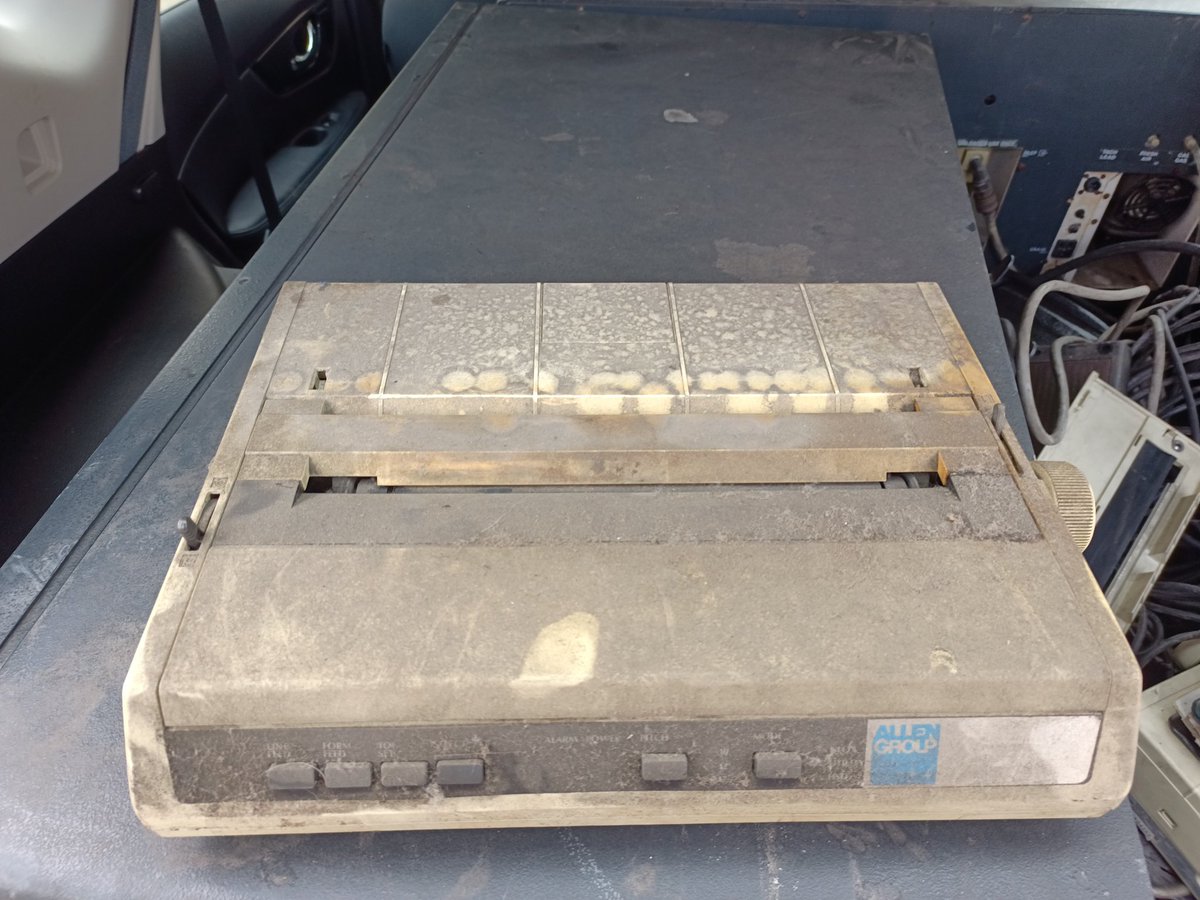 I've not yet had time to really look into how it works, but it seems it's some kind of SBC-based system

Those are two crts in there, probably monochrome 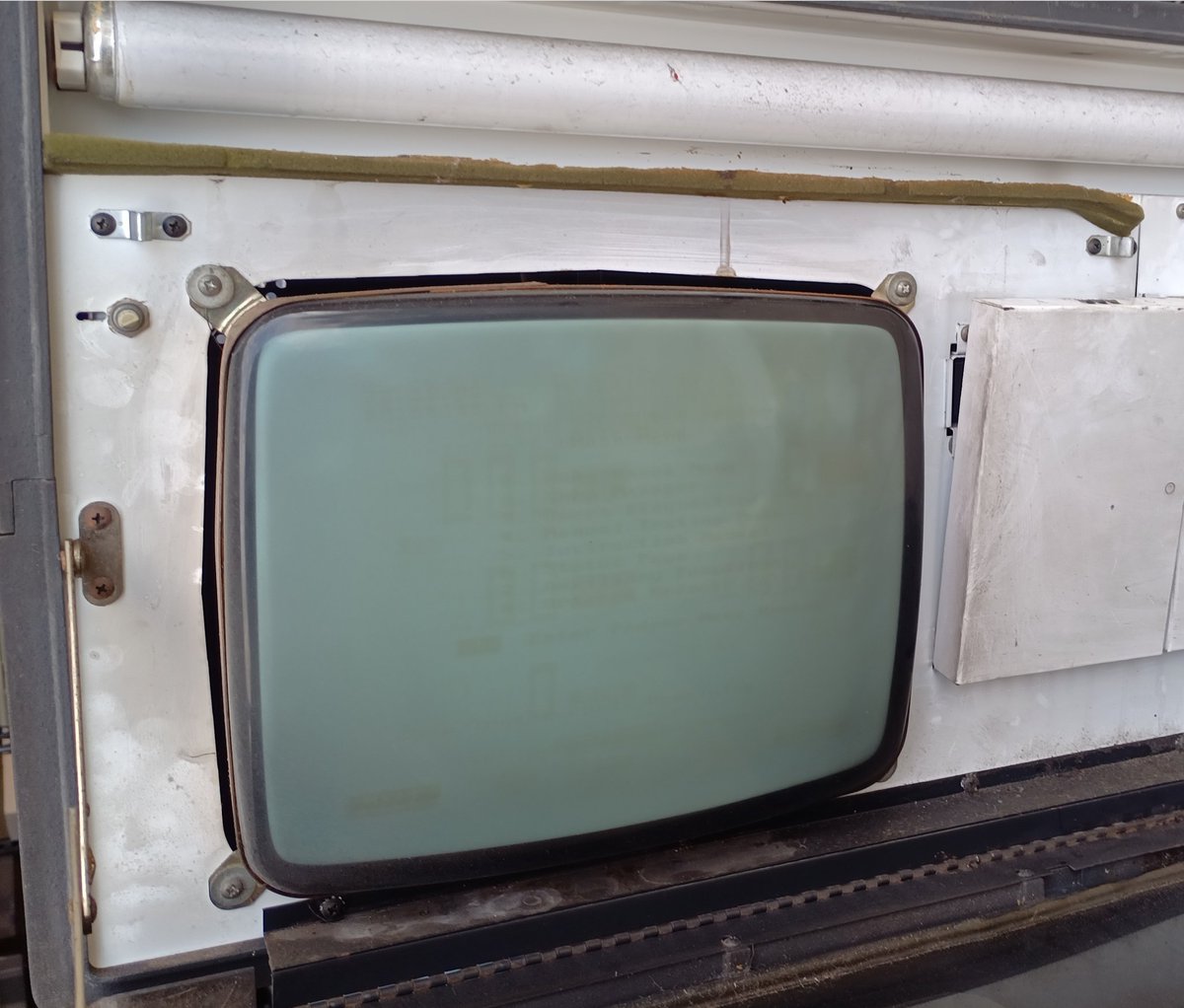 This unit had THREE printers. I don't know why it needed so many. I think they just kept adding new ones when the old one failed

It also was using a standard PC keyboard despite having this one built in. Probably this one is dead. 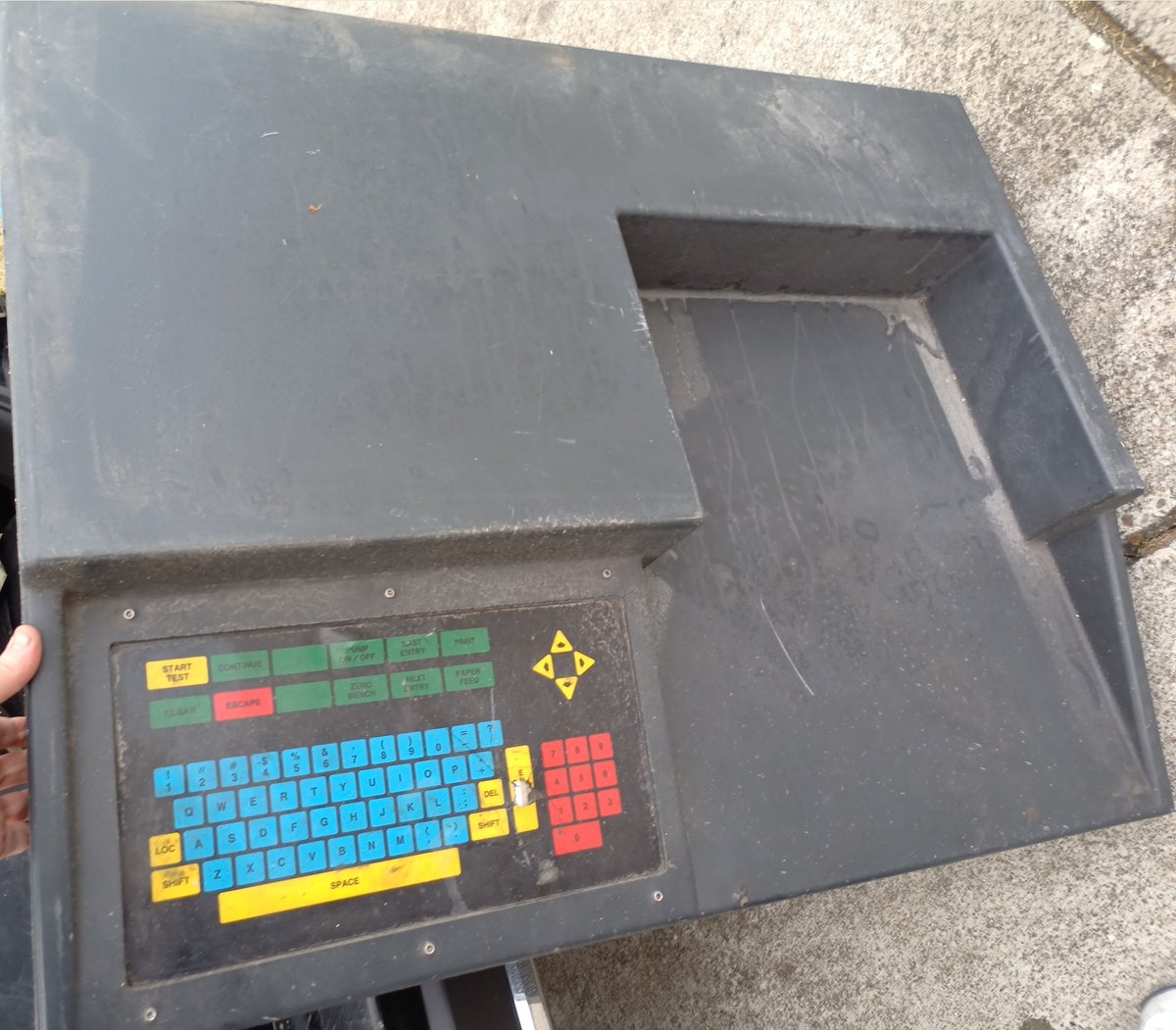 The one picture I've taken so far showing internals. 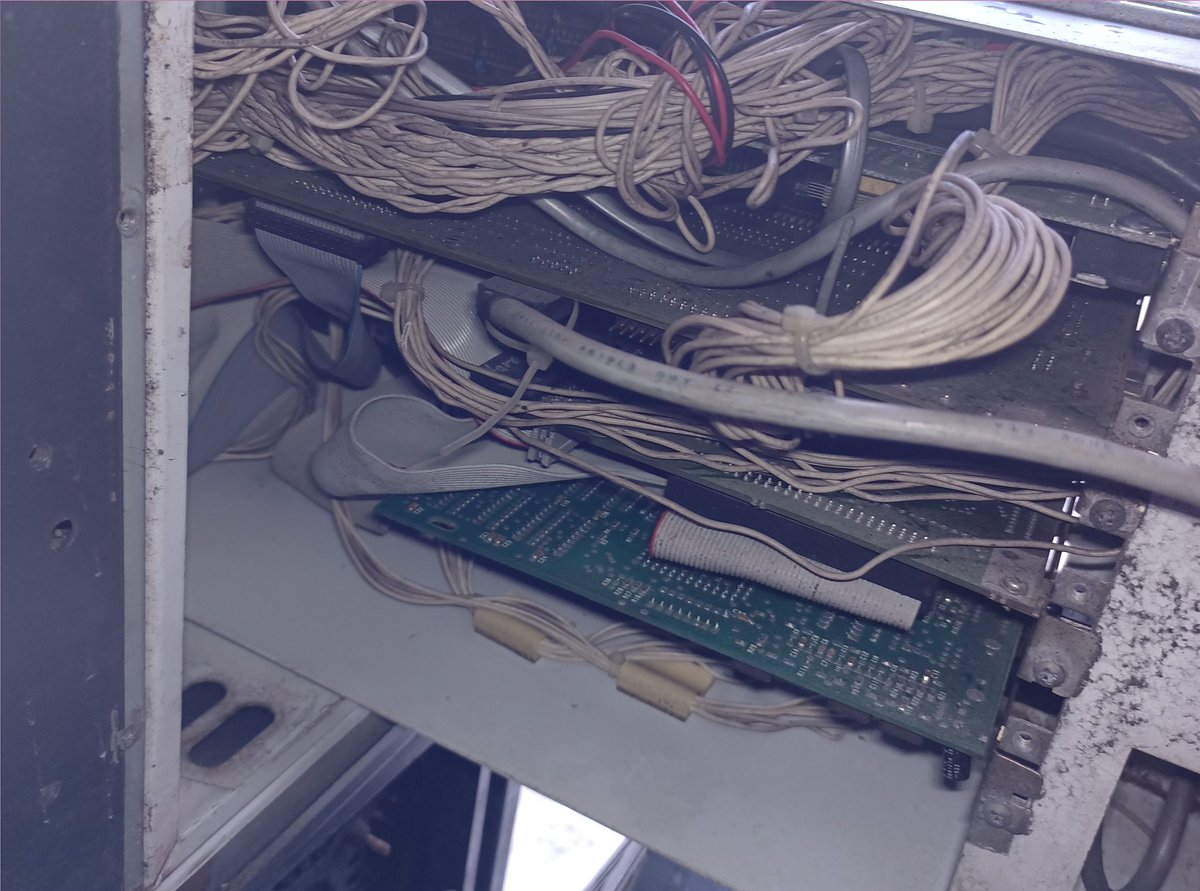 I want to do some documenting of connectors before I start yanking all these out.

But yeah, the oldest date I've seen on this think is 1989. It may be even older. It's spent all that time either inside a mechanic's shop or sitting outside, possibly in the rain

But yeah, I'll keep you updated when I can look into it further. From what I've seen so far, my guess is that this thing is a pc (8086 or 286), probably running DOS

so after taking some pictures for re-connecting cable reasons and detaching part of the Computer Drawer and pulling a card or two out, I was able to take a picture of the backplane and... a battery? that's no backplane, that's a motherboard! 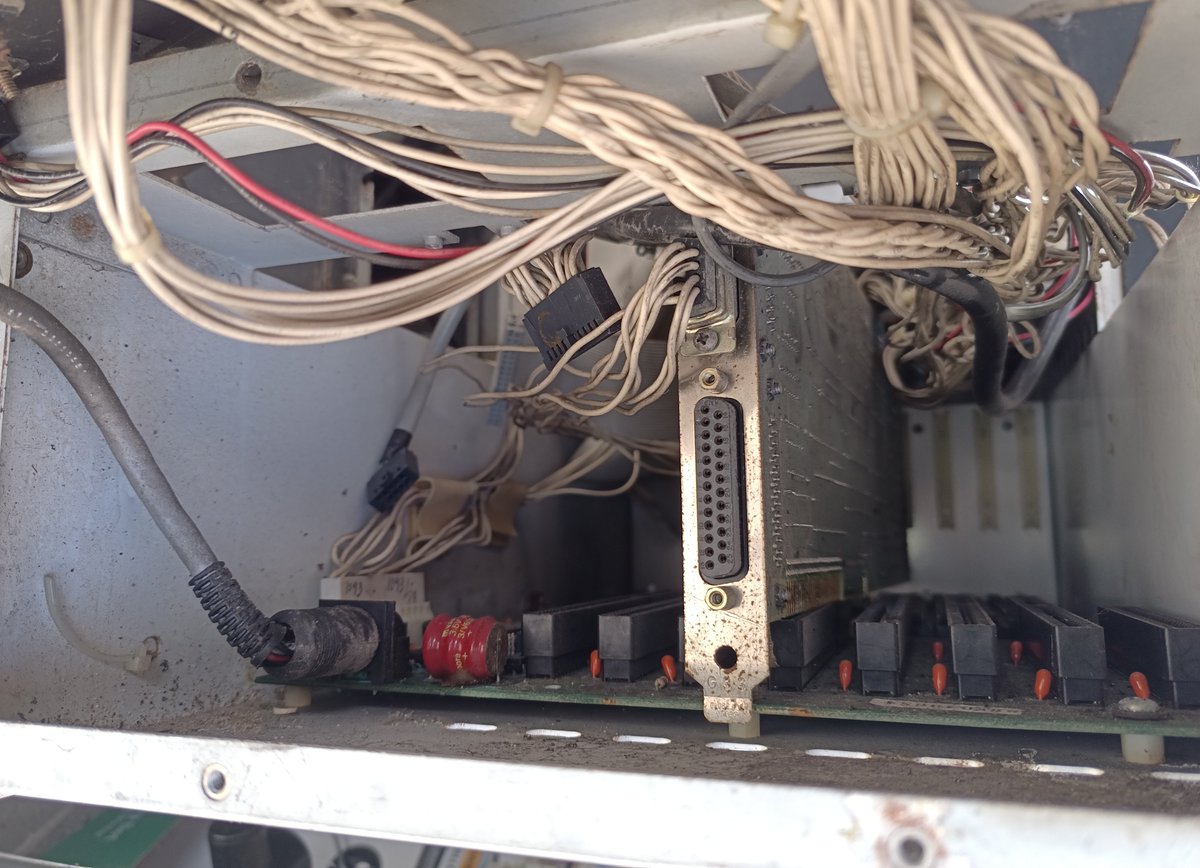 So after a bunch of painful disassembly, I can finally pull out all the boards.
First up, the motherboard!
This is an 286 AT-clone, looks to be from Suntec 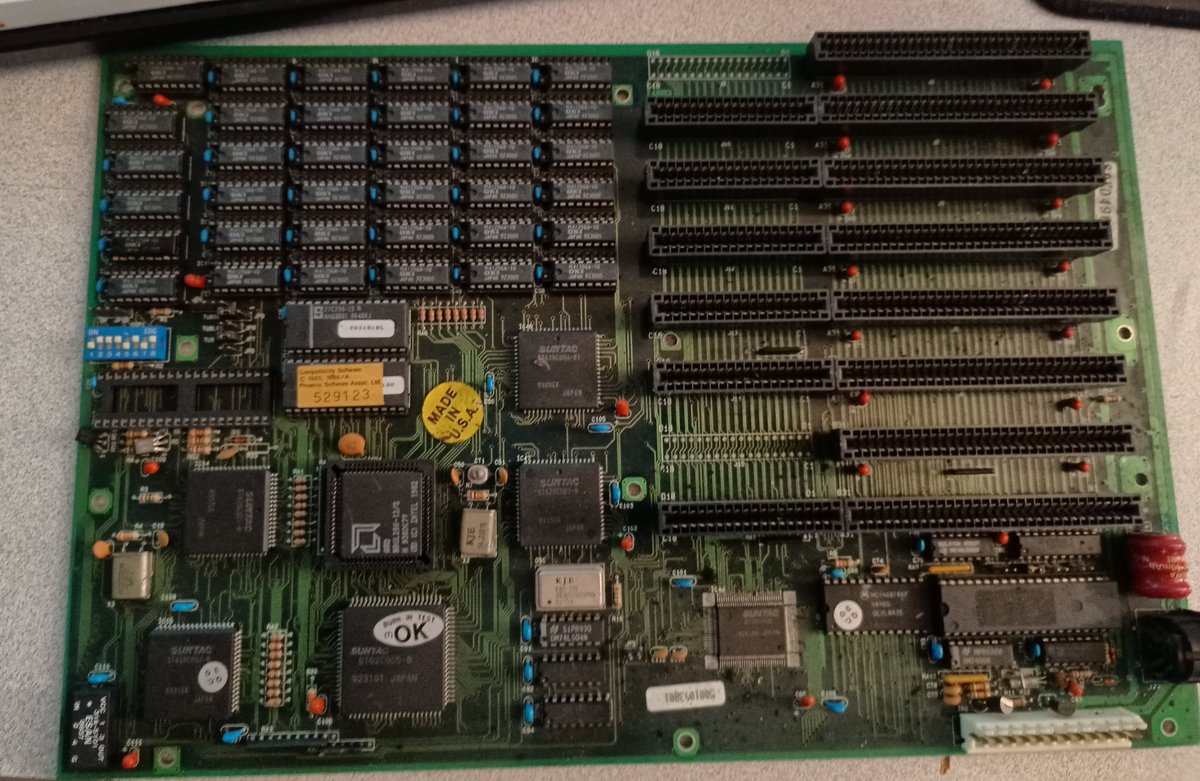 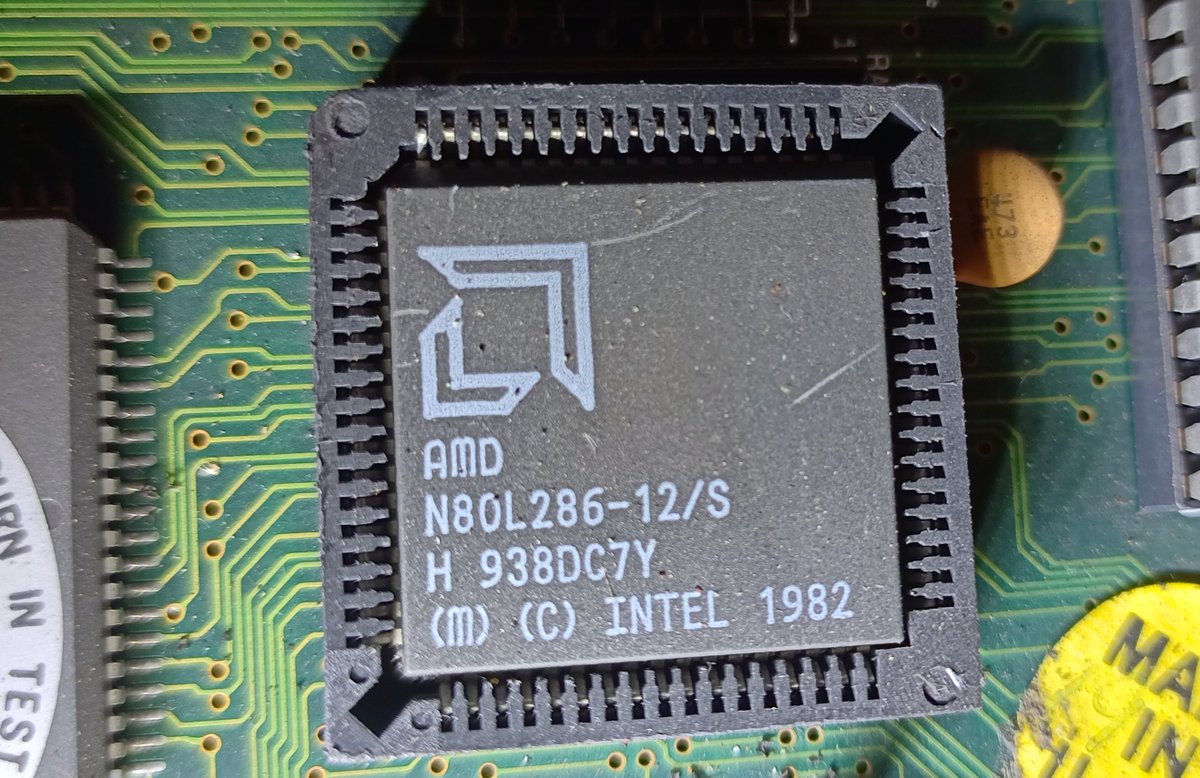 Sorry, SUNTAC, not Suntec.
This here is a DMA support chip 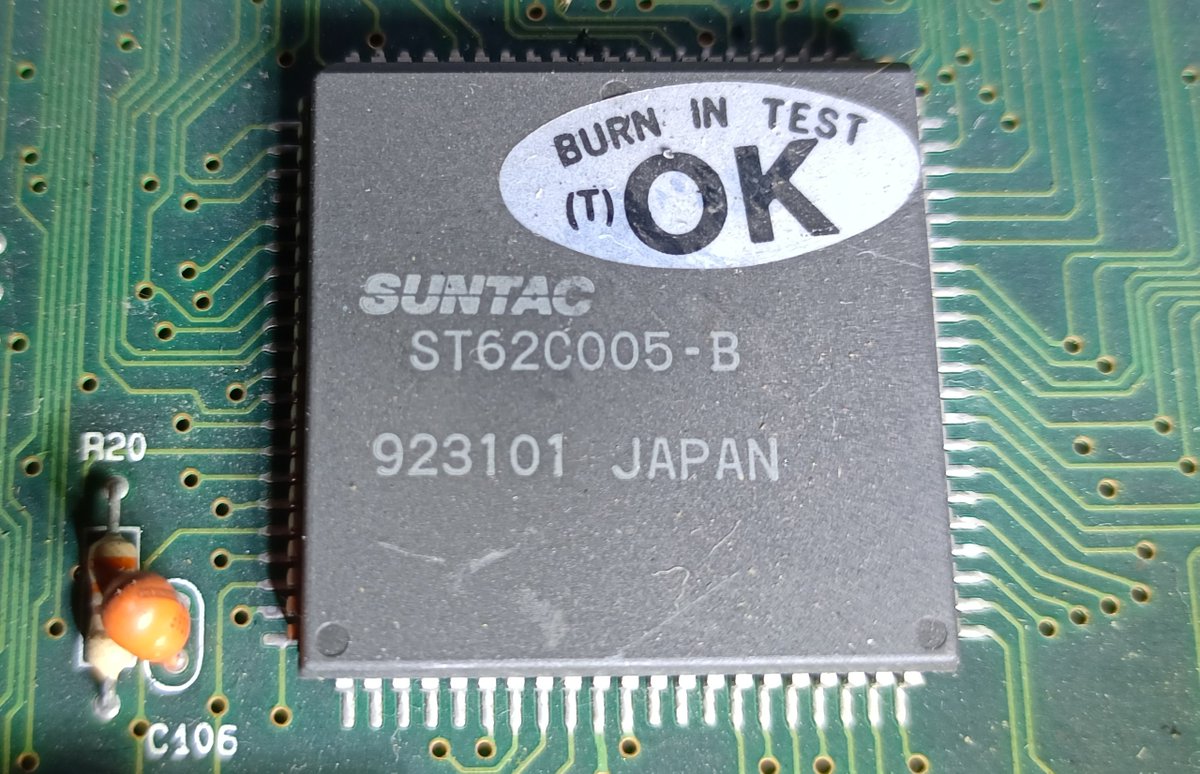 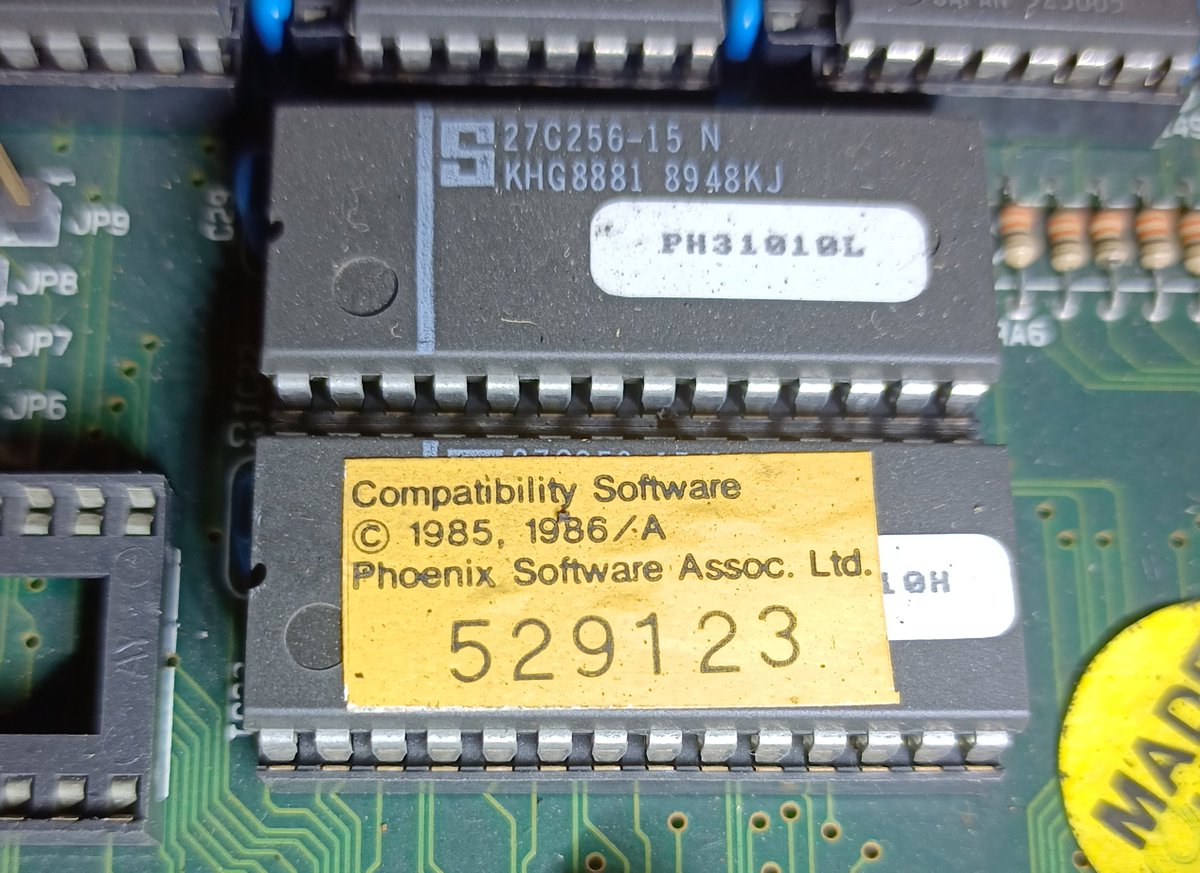 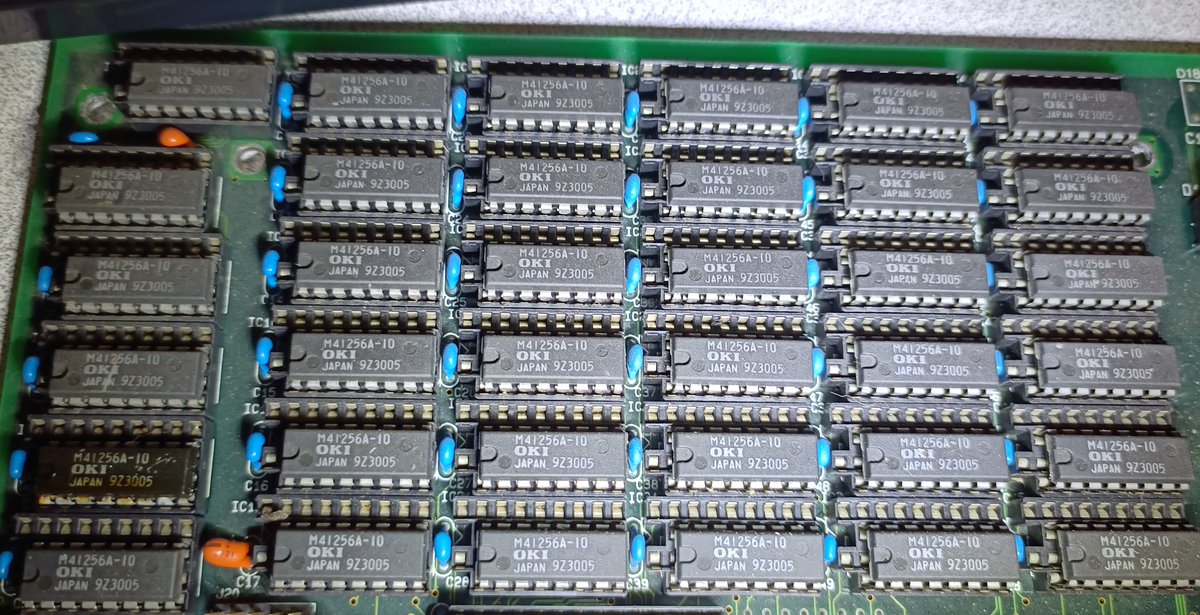 and of course it has a deadly Varta battery 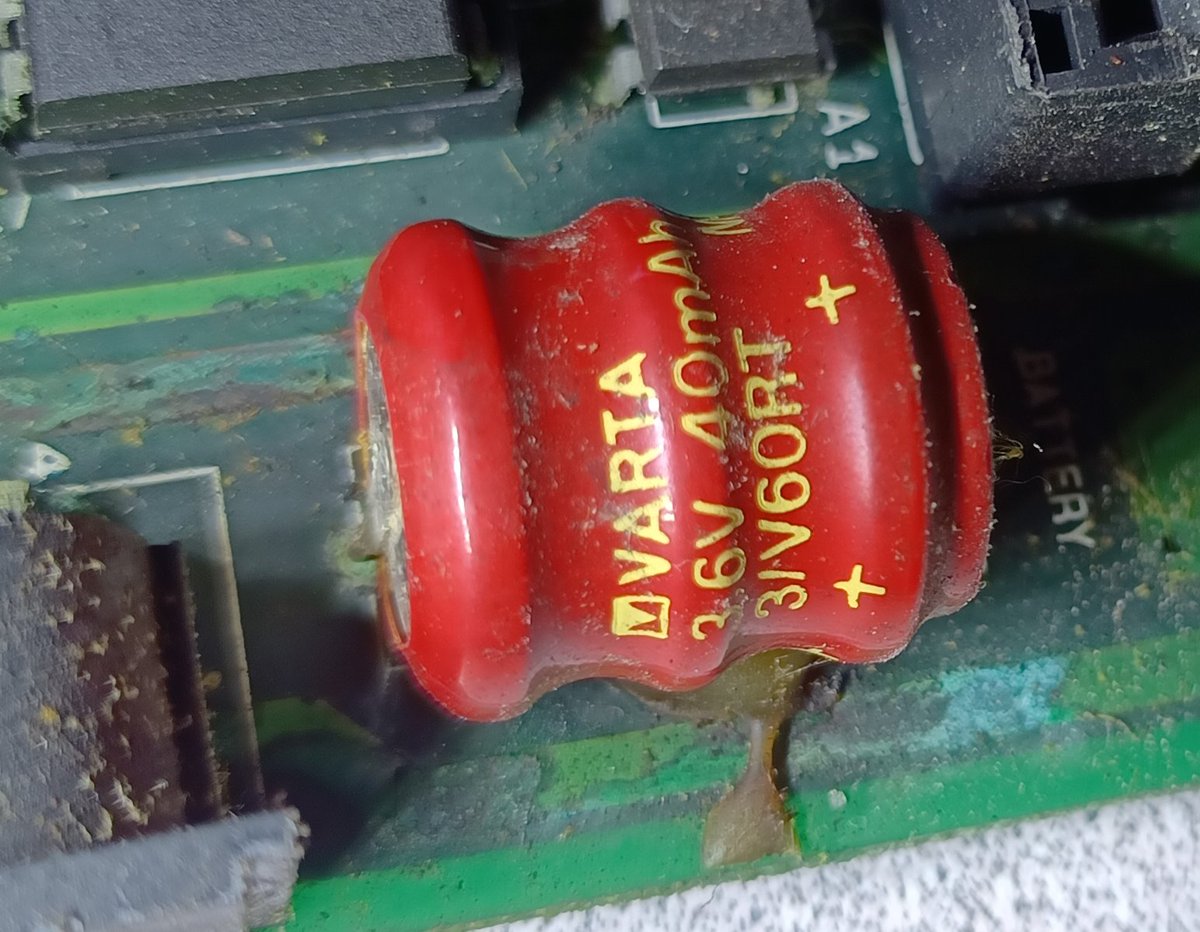 which has already damaged the board 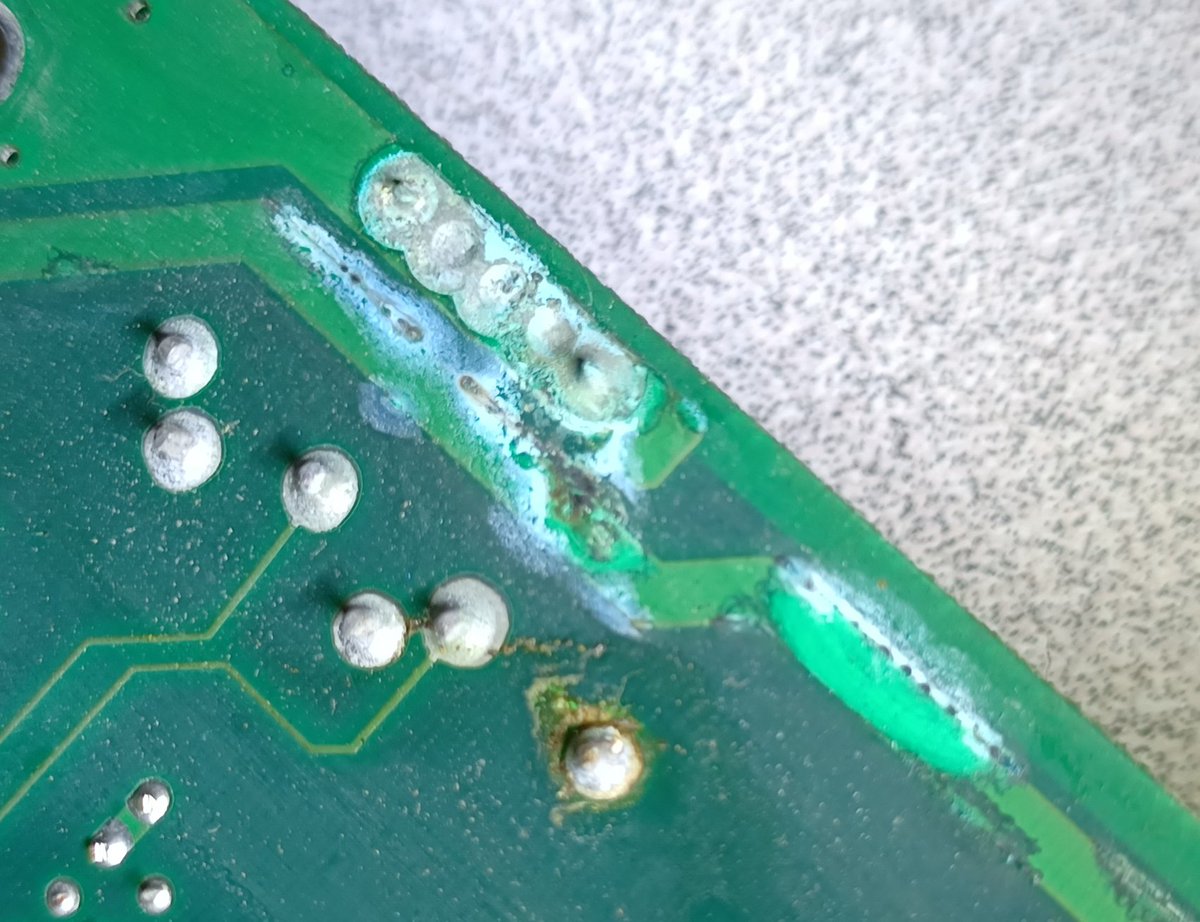 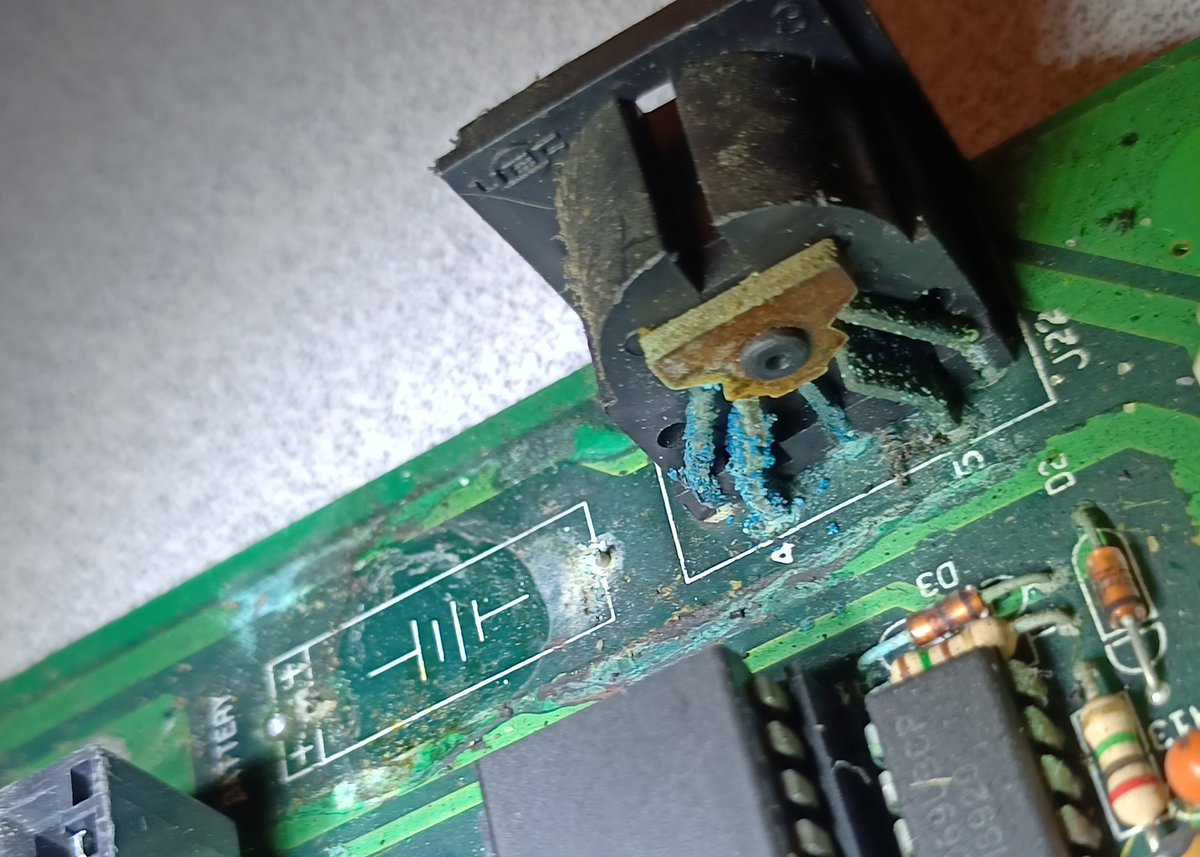 next up, the first of several cards.
This one is the video card, it's a Tseng Labs ET3000BX VGA card, 256 kilobytes of VRAM. 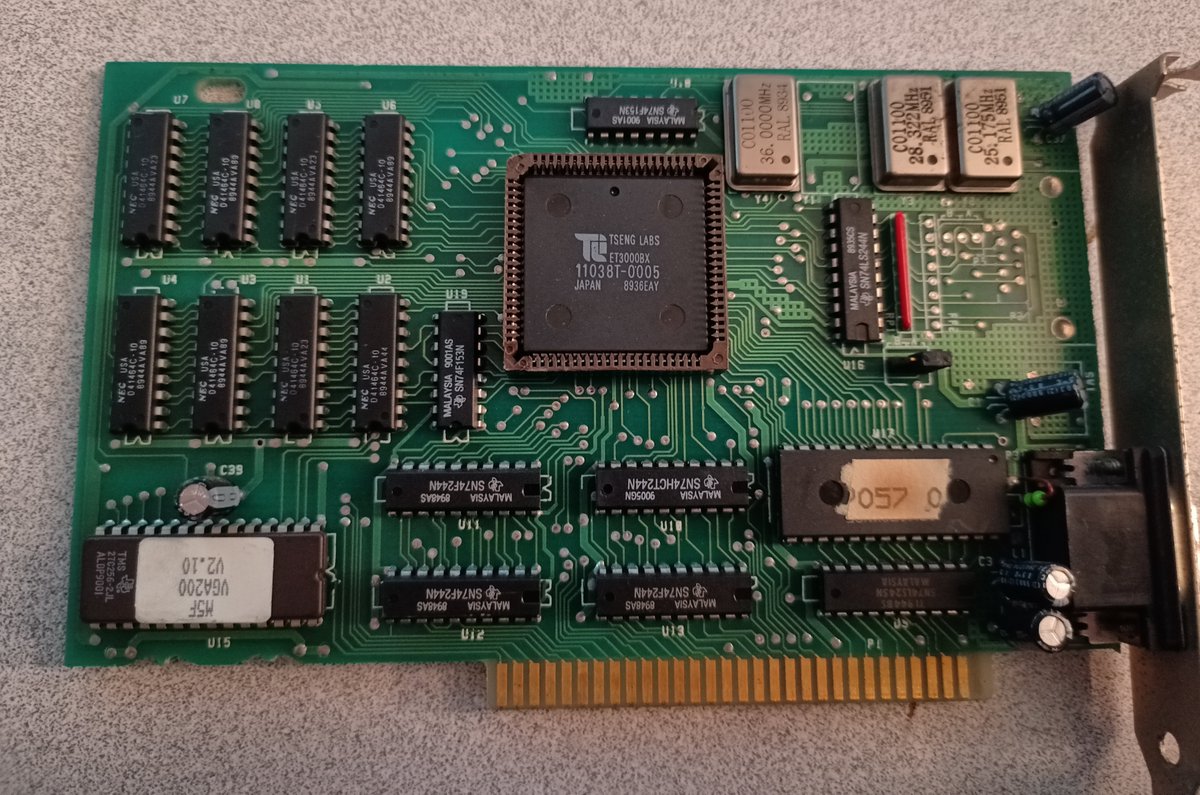 Then it's got a modem! everyone's least favorite ISA card to collect in 2021. 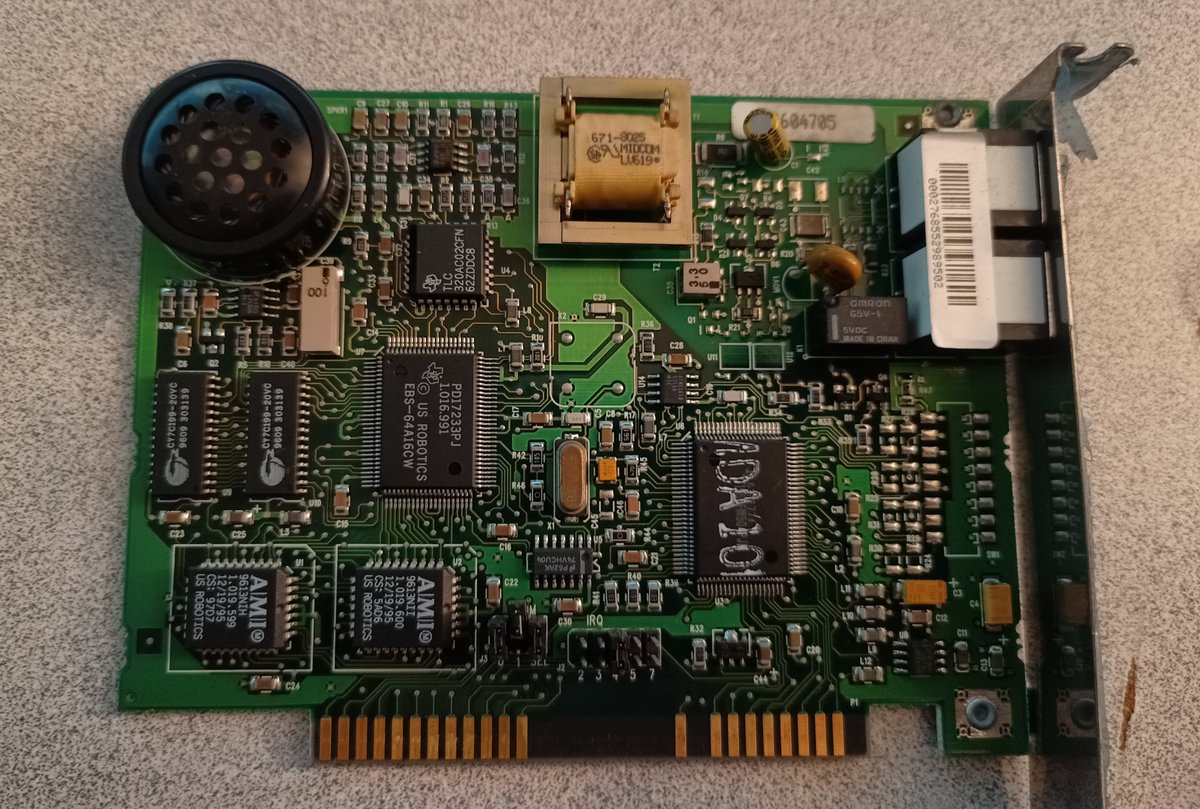 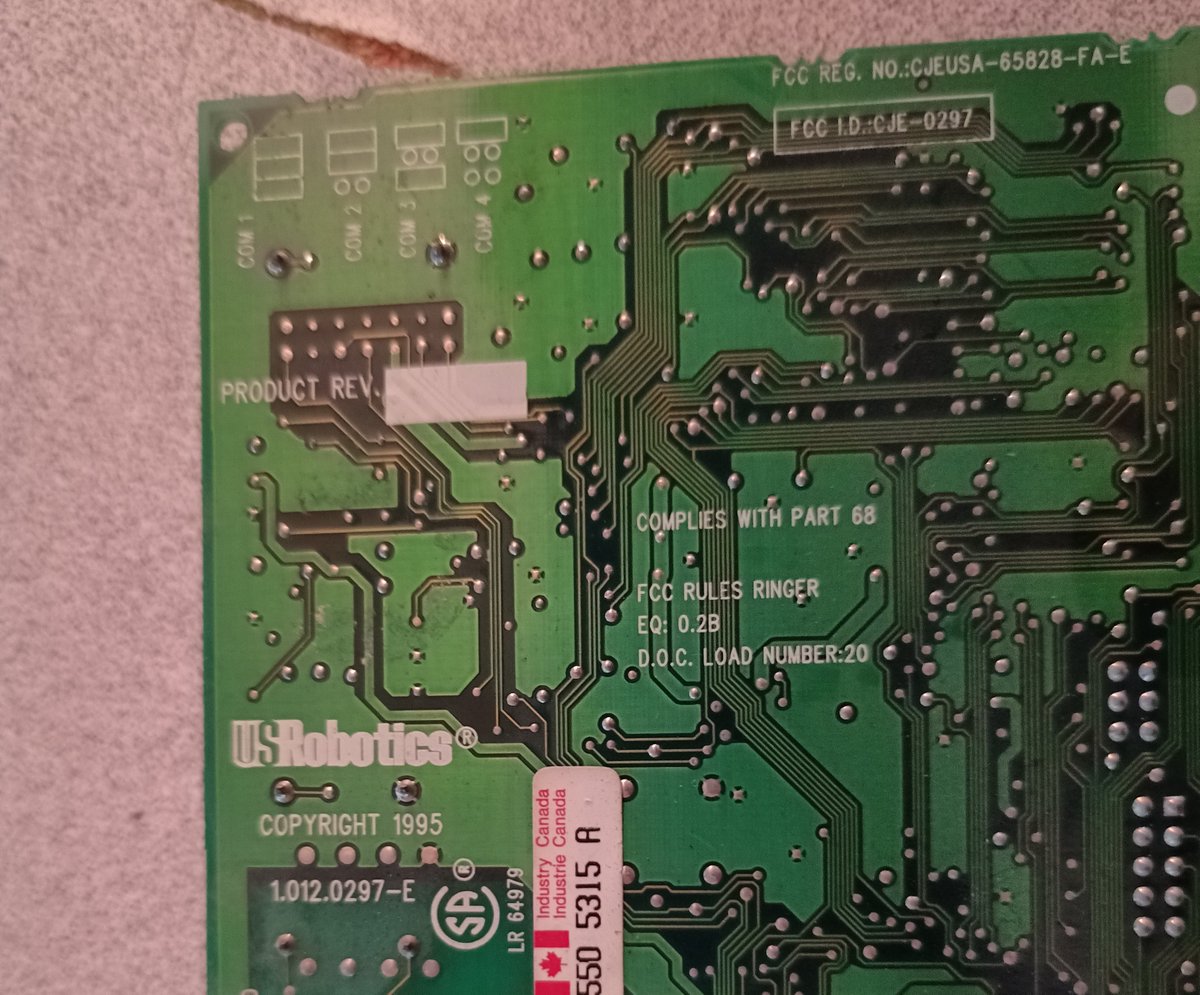 Next up is a Seagate 20917 SCSI controller (with expansion BIOS, so the computer can boot off a SCSI device) and floppy controller. 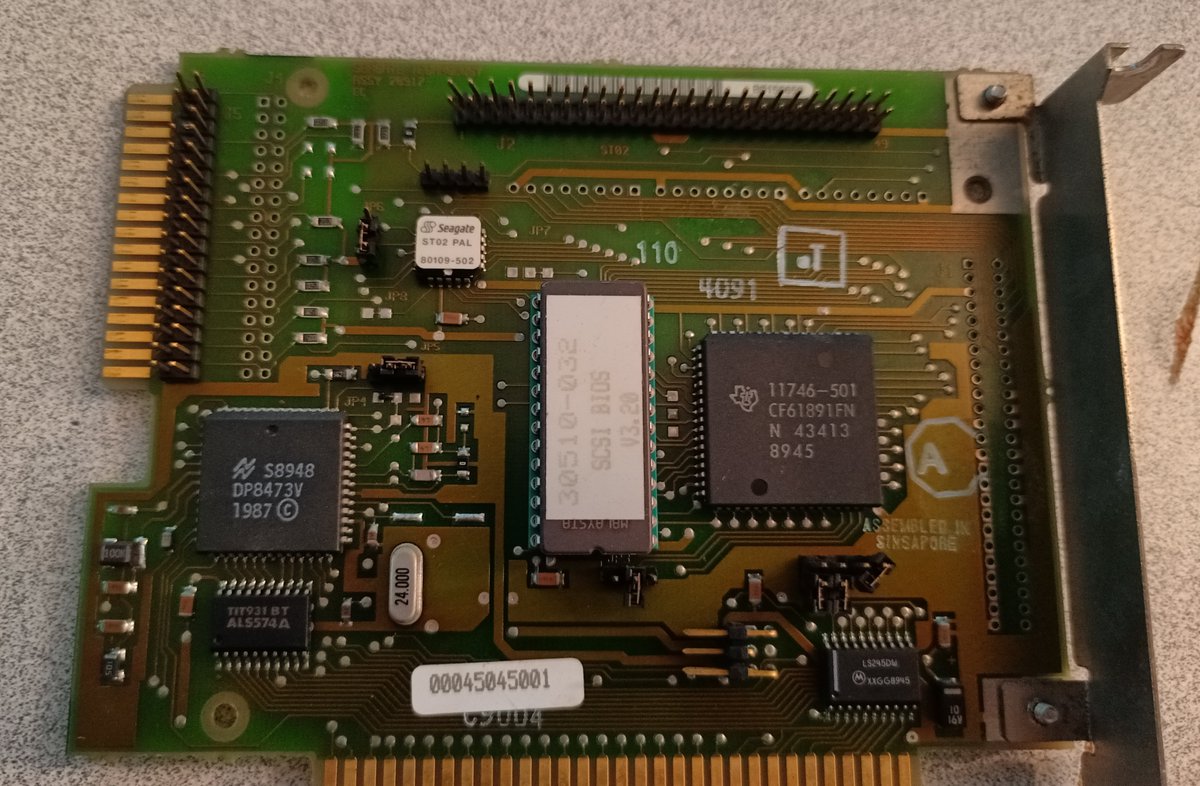 Finally there's the Big Mystery Card which came out blurry in this picture but I don't want to touch it again, I just washed my hands 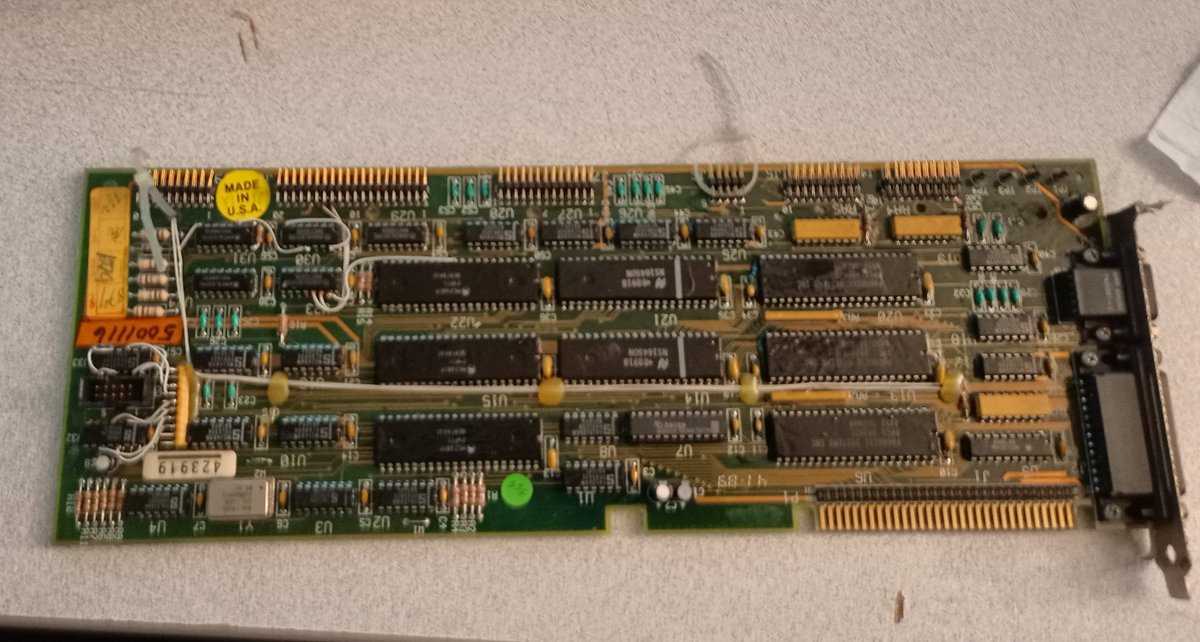 It's got some numbers and labels in the corner.
I don't know what these mean. 5001116 maybe a model number, or serial number? 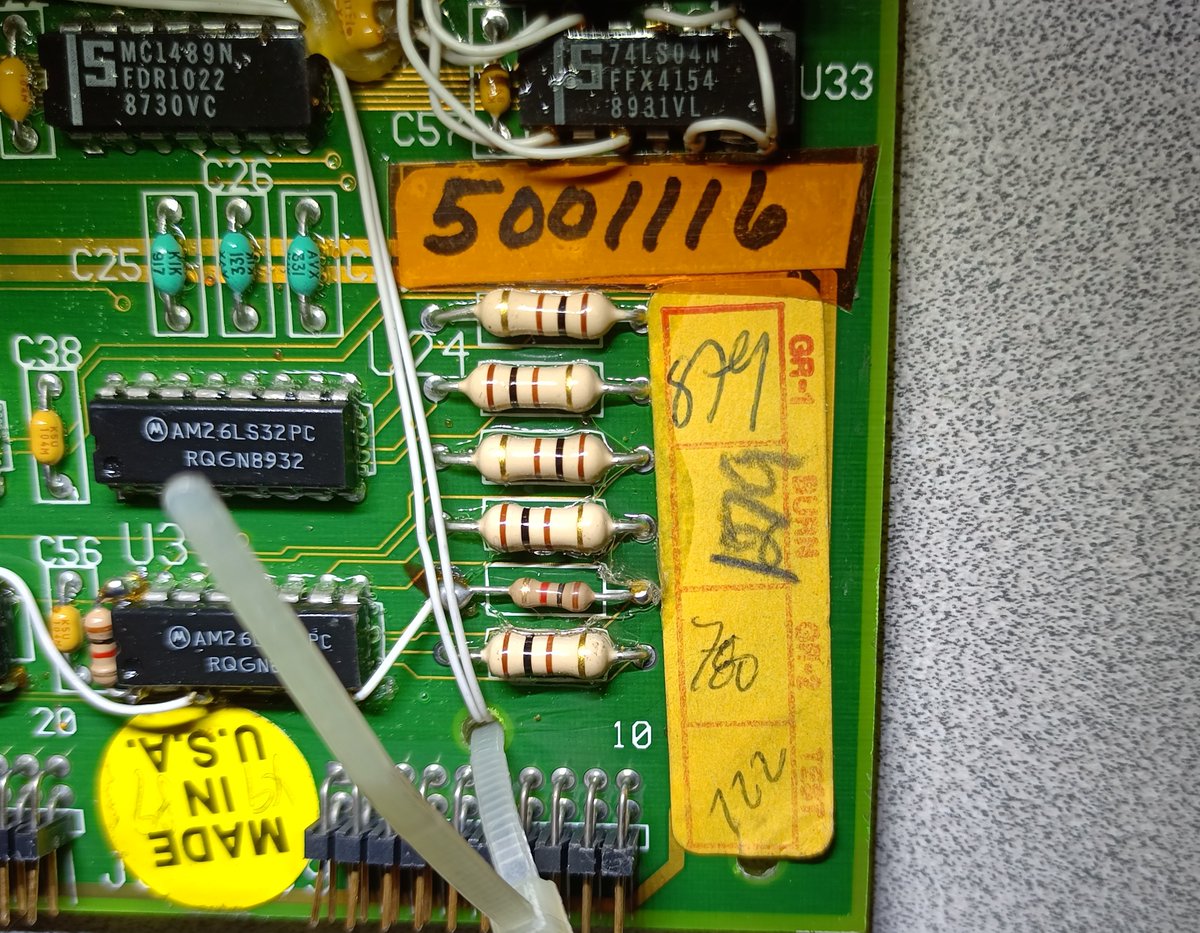 It's got three of these MC2681Ps, and that's a 2-channel serial controller 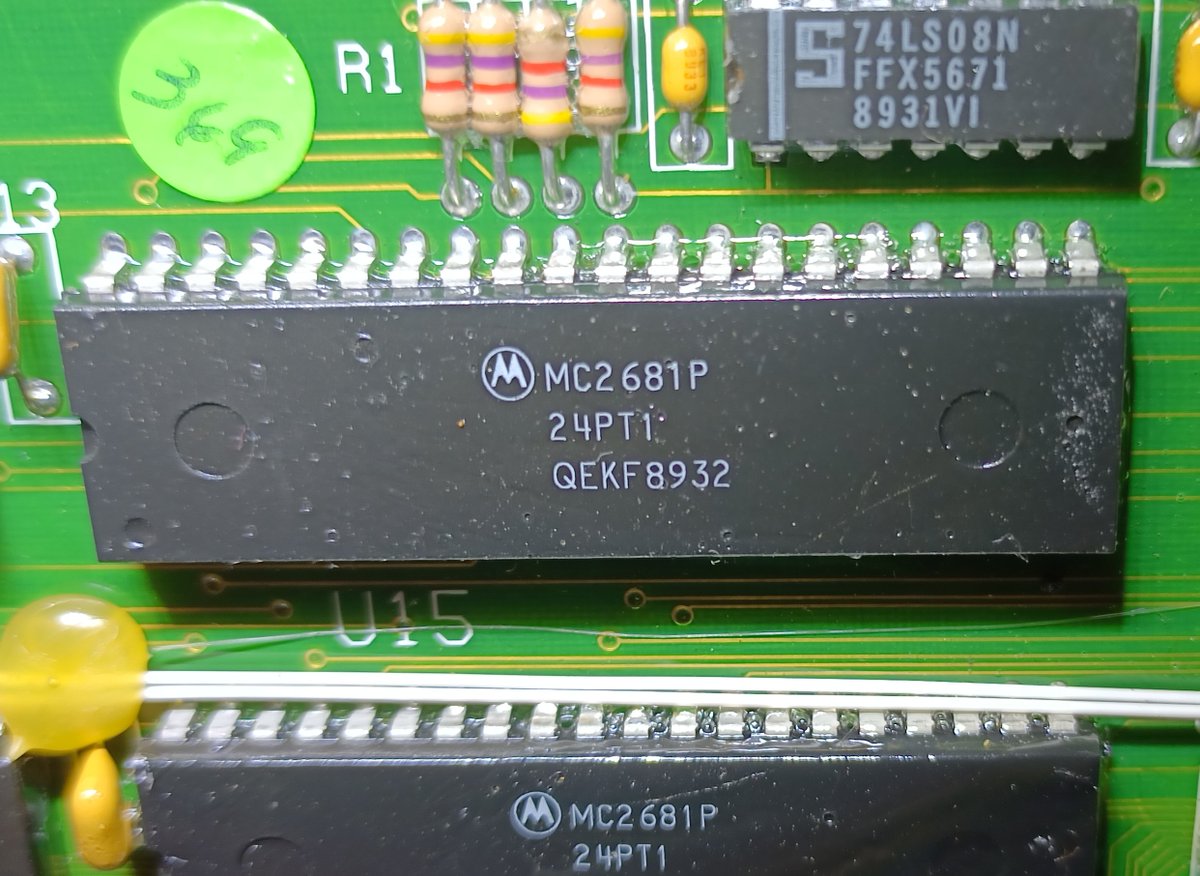 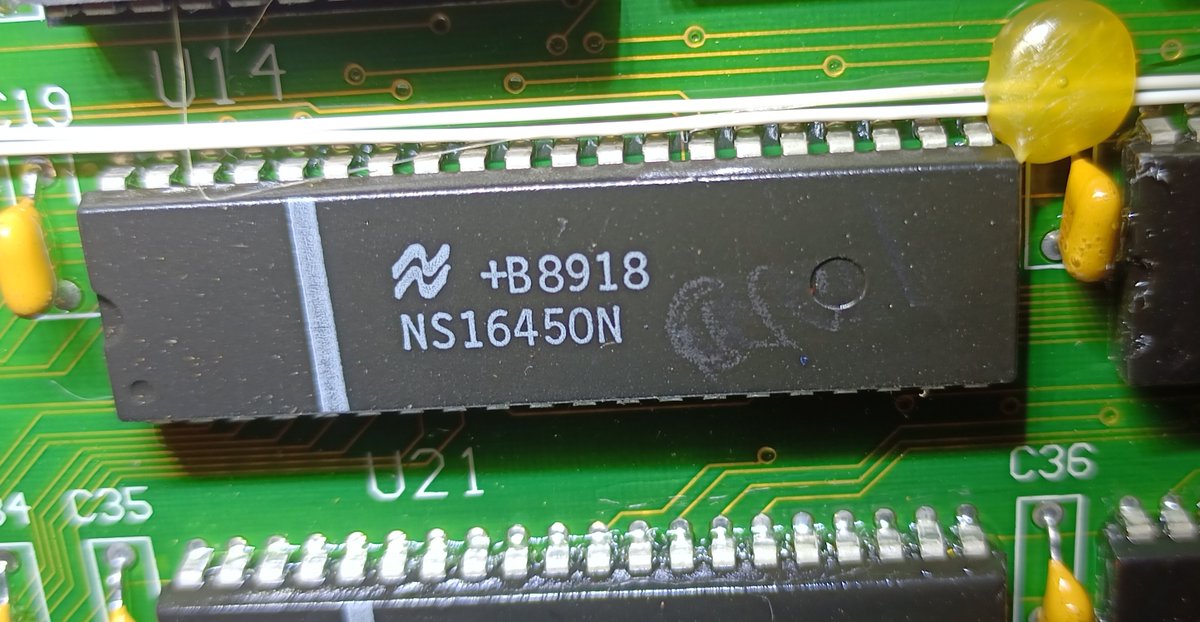 Then three Paradise Systems PPC1s, which are apparently a printer controller

and that's it. No other special hardware in the PC.
It sounds like everything hooks up over some kind of serial port and talks to the PC that way

the remaining parts of the main PC that I haven't yet looked at are the SCSI hard drive (if it's still in there: I haven't spotted it yet, but I haven't fully disassembled it either) and the monitor. The monitor is a monochrome VGA unit, I think

it's also still a question as to what it runs. I'm guessing DOS, but there's still a possibility it's something weirder or it just runs as its own OS

These are the two floppies it came with in not-obviously-water-damaged format.
The left one seems to have been nevere opened, and has a 1992-1994 date, and the right one has a 1998 (!) date 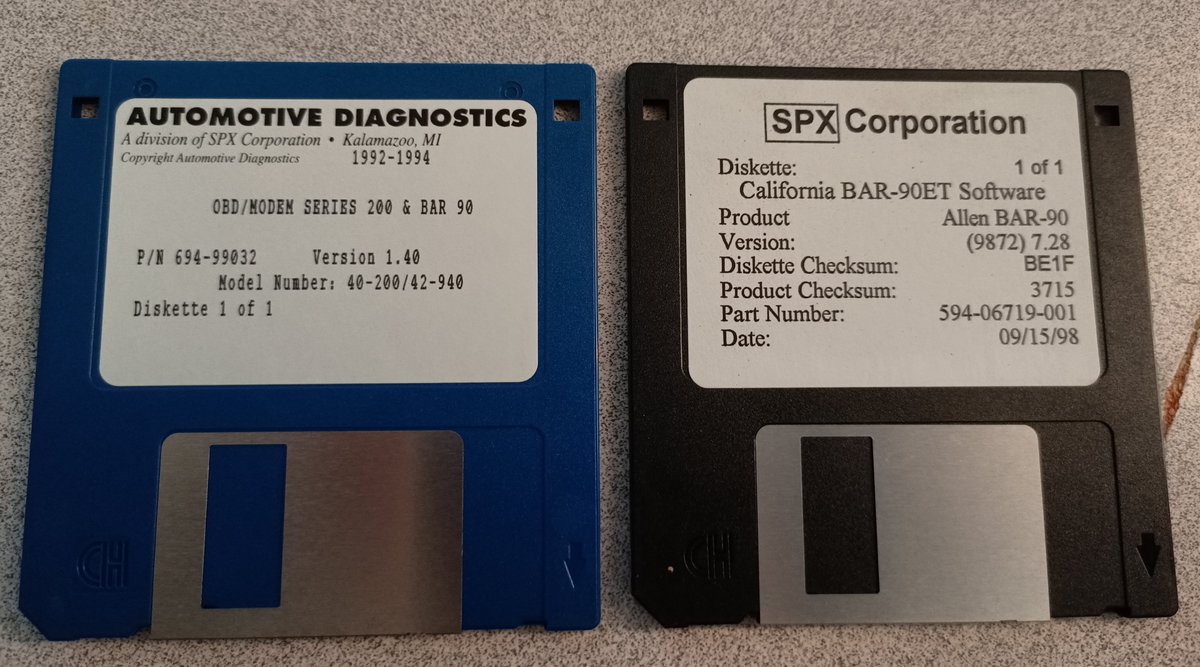 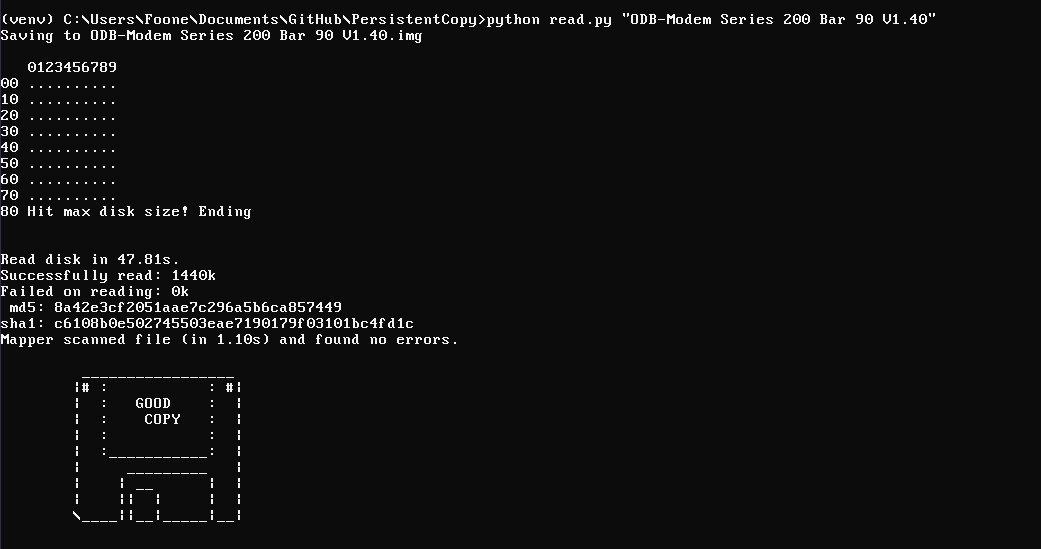 The left disk autoboots into an installer, and... not for use with bar90? I thought the disk said it WAS for the Bar90? 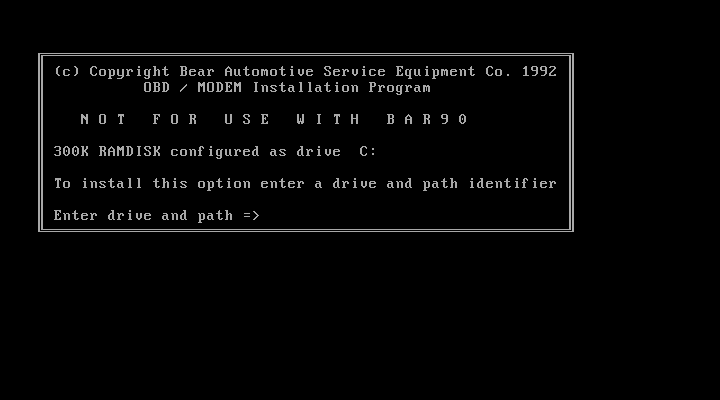 YEAH WHAT DOES THAT "BAR90" MEAN 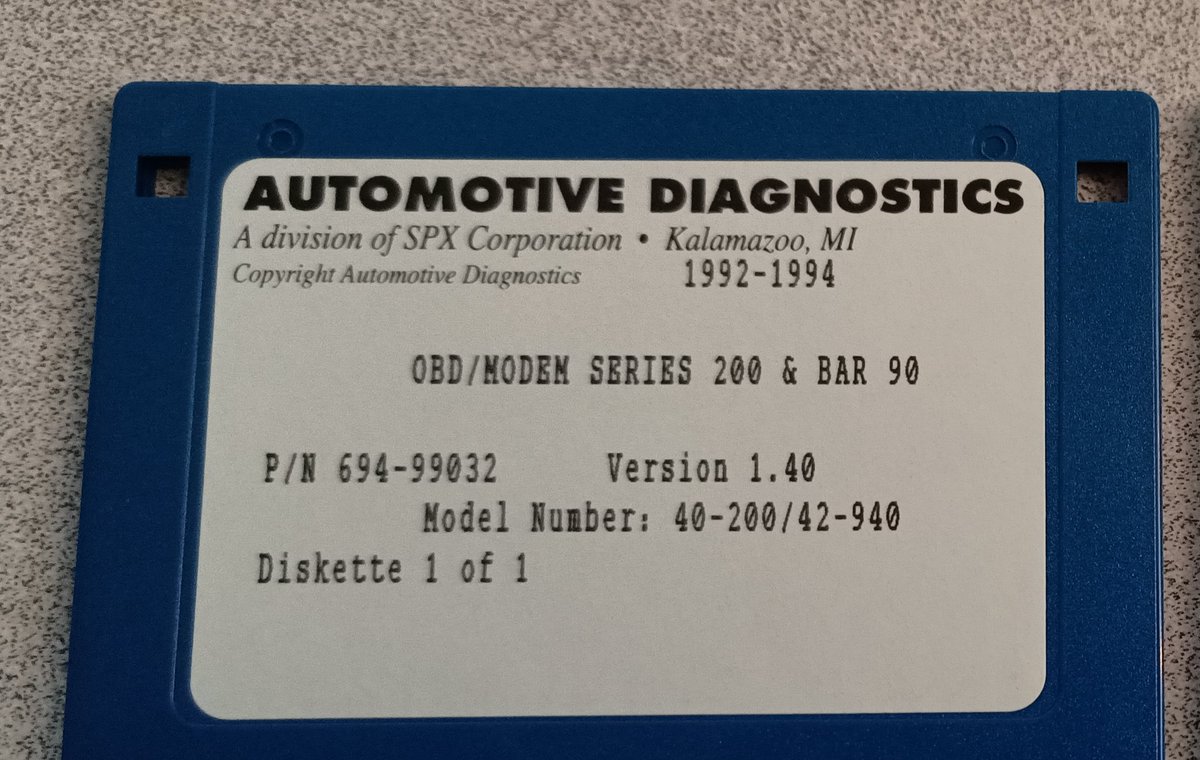 obd.exe is Bear BAR 90 On board Diagnostics 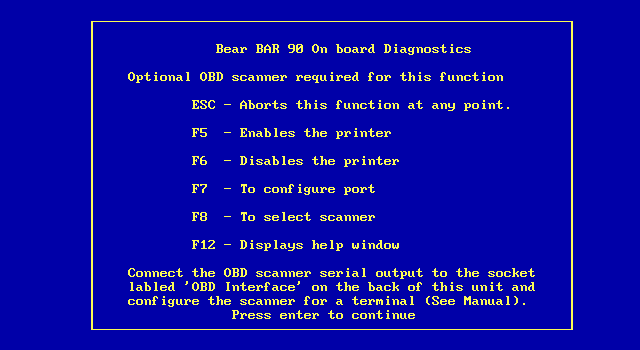 Hey guess what showed up in the mail today? It is my applesauce upgrade.