1/ Tweetstorm on what I see as the future of Disney (detailed here:  https://redef.com/original/disney-as-a-service-pt-ii-and-the-future-of-the-house-of-mouse …)

There are four core questions: (1) What is their D2C play; (2) How does it change Disney; (3) How will it do; and (4) What does it mean for Disney’s future and the rest of the industry

2/ "Disneyflix" is likely to start as Disney-only version of Netflix, but it will come to include far more than video. Look for it to bundle in comics (eg the Marvel Unlimited subscription), eBooks, app games, music, eCommerce (merch, park passes), etc., over time

3/ This started with Disney Life in the UK, but the broad concept has underpinned Disney for decades. In 1957, Walt himself outlined a vision of the future where all of Disney’s IP, business units, offerings and employees worked in concert. Yet, this was largely impossible 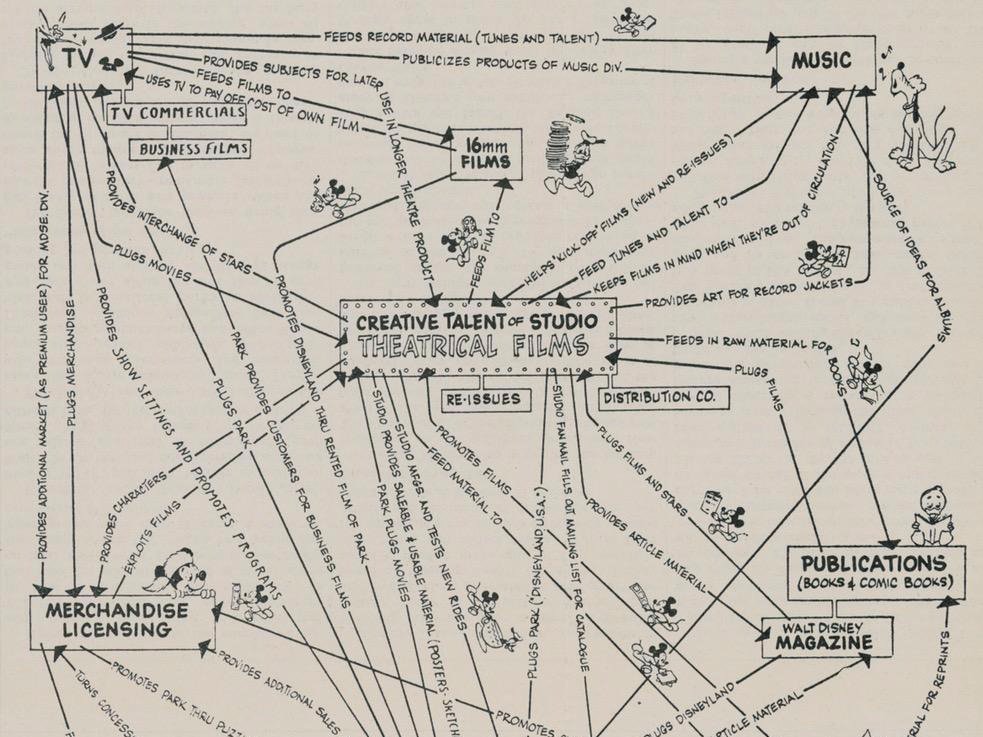 4/ Disney did share IP, talent and learnings, coordinate across business units, and so forth – but it remained stuck in the business of selling individual units of content and individual experiences, through third parties, on irregular timelines and to customers they didn’t know.

5/ Moving to a D2C experience delivered OTT and via subscription (v. transaction) will enable Walt’s vision to become reality. But to this end, it will also necessitate and drive significant evolution in how/what/why/when/where Disney releases content and how the company operates

6/ Sidebar: I do think we'll likely see a few different subscription models emerge over time (Everything, Video Only aka "Disneyflix", All Marvel or All Star Wars, etc.) as Disney tests different customer discrimination models

7/ The most clear change will be the evolution of Disney’s feature film strategy. I’d argue they’re already on a path to Day-and-Date (or even direct-to-platform only, or "D2P") releases of their major franchise films.

8/ Disney: (1) is already developing D2P film releases (some of which were planned for theaters); (2) will likely swap the order of the home video and SVOD releases to drive DFLX subs, not retailer sales; (3) will keep shortening the theatrical window itself to speed SVOD release

At the same time, the OTT platform's importance and value to Disney will only grow. It will become the epicenter of everything Disney does.

10/ Day&Date has several other advantages: increasing total viewers (critical for platform IP), de-risking creative failures, converting a $9 ticket (that Disney gets only $5.50 of and spent $3 marketing) into a recurring customer subscription (LTV), service differentiation, etc.

12/ Historically, theaters have said they would not show any major film with Day-and-Date releases. So there is a risk that only D2P is viable, not D&D.

13/ Speaking of, I suspect the majority of Fox’s film slate (i.e. Fox Searchlight and all non-tentpole films) would likely become D2P from day one if Disney does acquire the company

14/ Lots of big internal changes too. Disney would need to partly pivot their incredible video strategy. Rather than focus only on titles w/ top audience potential, maximizing subscriptions will require spend be diverted to content that addresses smaller, underserved audiences

15/ Org, comp and talent models will also be challenged by the shift to consolidated, multi-category, multi-IP, multi-title P&Ls. Some successes won’t be simple “$XMM profit”.

17/ Moving onto how it'll do. Disney has two huge non-content advantages: demographics and existing spend

18/ There are 19MM US HH with one minor & 16MM with 2+. At the right price (Iger has said "substantially less than [$10]") it's hard not to imagine most families paying to tap into virtual the entire Disney film catalogue. NFLX already has 50%+ of all HH at 2x the price

19/ Spend: US HH spend ~$2.8B on Disney home video today. That's ~40MM in annual subscriptions at $6/mo. For these customers, DFLX will offer more content, faster and cheaper in JUST replaced spend

20/ This gets to a key advantages in going direct. You cannibalize your wholesale revenue, but can access consumer retail spend.

22/ Put another way, Disney has a huge addressable market (existing customers and existing spend) for which their product will be an immediate improvement (both for Disney and audiences/consumers)

23/ Disney will also benefit from an unprecedented ability to drive organic interest in the service and free trials (i.e. the “top of the subscriber funnel”).

24/ With no incremental customer costs, Disney is likely to include free trials with purchases of theme park passes (30MM Americans attend each year) and merchandise (the company sells $300 tote bags), provide free access to the service for those staying in its hotels cruises etc

25/ And release high-value content (e.g. deleted scenes or trailers) exclusively on the service. There is no media company on earth with more pathways to drive early subscriptions.

26/ Also worth noting is that the street and press tends to overstate the relative important of TV content versus film. There's a lot more of the former, it's typically platform-first and more cultural these days - but its incredibly high value

26/ HBO, for example, says 40% of its subscribers watch only films, and that films represent 71% of all consumption (and 61% of on-demand viewing).

Over the past two years, Disney’s films have averaged 25% of all tickets sold and represented nine of the top 10 films.

28/ If the Disney streaming service works, it will transform what multimedia storytelling looks like, permanently disrupt the theatrical window and change the way we think about IP monetization. Crucially, Disney is the only one that can provide such an offering today

29/ They've the broadest appeal (everyone watches Disney content), scale (no one comes close to their IP catalog) and scope (with myriad in- and out-of-home experiences).

30/ There are a lot of challenges here, of course. They will be late to the game and their content rights will take years to fully revert. Their product will be worse and penetration lower - and Disney will need to continually focus on their legacy business.

31/ This is a big danger - companies that aren't "all in" on digital tend not to thrive in digital. Making the culture shift will be the hardest part.

32/ But one shouldn't diminish the advantages or exaggerate the challenges.

Creating an OTT video experience is easier than ever and still getting easier and cheaper. Customers are rapidly adopting D2C subscriptions.

33/ While Disney will be tried up in old businesses, this also means they can finance a lot of growth and keep working to get it right. If you consider Netflix's B/S a threat, you need to see Disney's CF as a massive asset

34/ To this end, Disney doesn't need to be "*all* all in". There's no need to abandon their network portfolio, terminate home video sales or comics, etc.

35/ Considering Disney's OTT future as binary - the biggest thing ever or a failure - is false.

It will be a success, but how big remains uncertain. But that quest is backed by best-in-class IP and creative, a massive balance sheet, existing spend and the odd luxury of time

<For now at least>