1/ Here are some REALLY interesting findings from a controversial empirical paper asking:

*WHY do some people become ENTREPRENEURS?*

Of the many findings + hypotheses, a few stand out
-SIGNALING theory
-REJECTING a system that REJECTS them...

2/ One of my favorite quotes is from William Blake:

"I must CREATE a system or be ENSLAVED by another mans;
I will not reason and compare: my business is to CREATE"

3/ Related:
In recent thread on the rule-following/restrictive conformity of some MBA institutions (good criticism/counterpoints expressed, most vocally by sunk-cost + identifying MBAs) I see value in
1) concentrated self-selecting network
2) SIGNALING

4/ This paper by NYU Stern (MBA school) friend + prof Deepak Hedge suggests...
Individuals with ACTUAL ability that EXCEEDS the SIGNAL value of their ability (ie they know they are better than employers can tell from credentials)...become entrepreneurs. 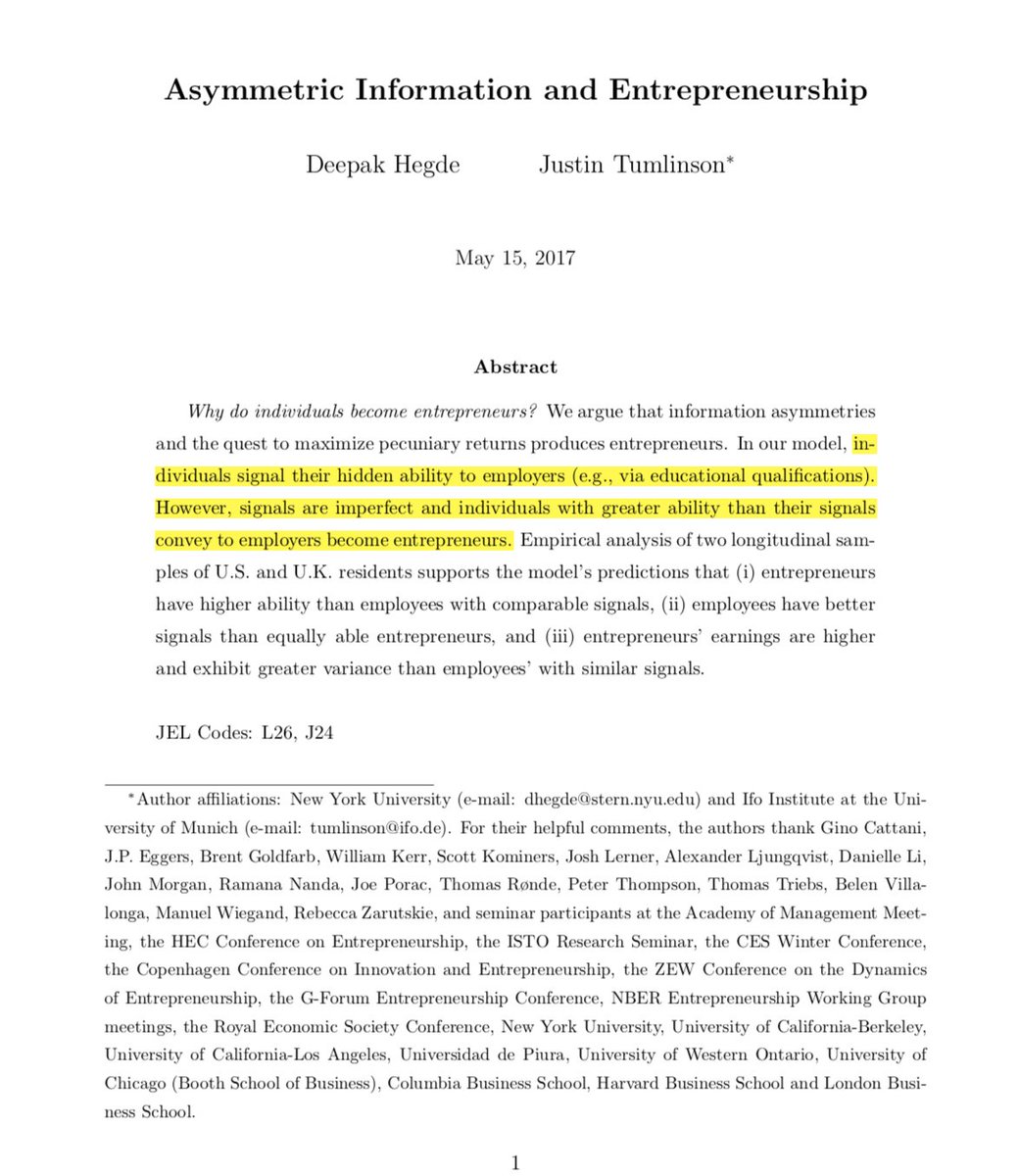 5/ Any individual has an incentive to start a venture IF potential employees underestimate their ability
-Steve Jobs was rejected for job at HP (b/c he lacked degree)
-Jan Koum was rejected by Twitter AND Facebook (to start WhatsApp 1 year later + sell 5 years later for $19B)... 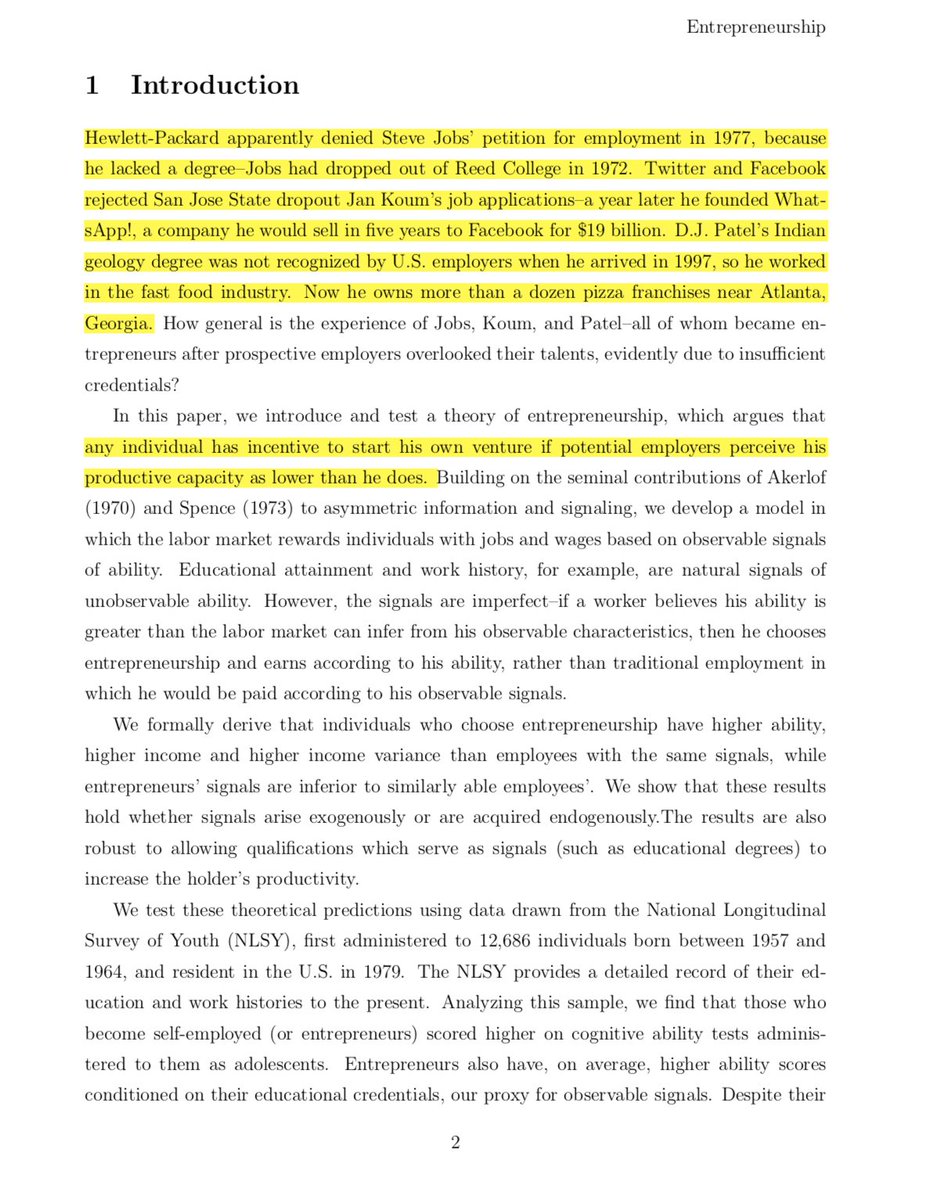 6/ Overconfident, hubristic individuals gravitate toward be entrepreneurs...AND...tend to have higher ability, greater self-esteem AND more likely to have done "illict activities" than others. 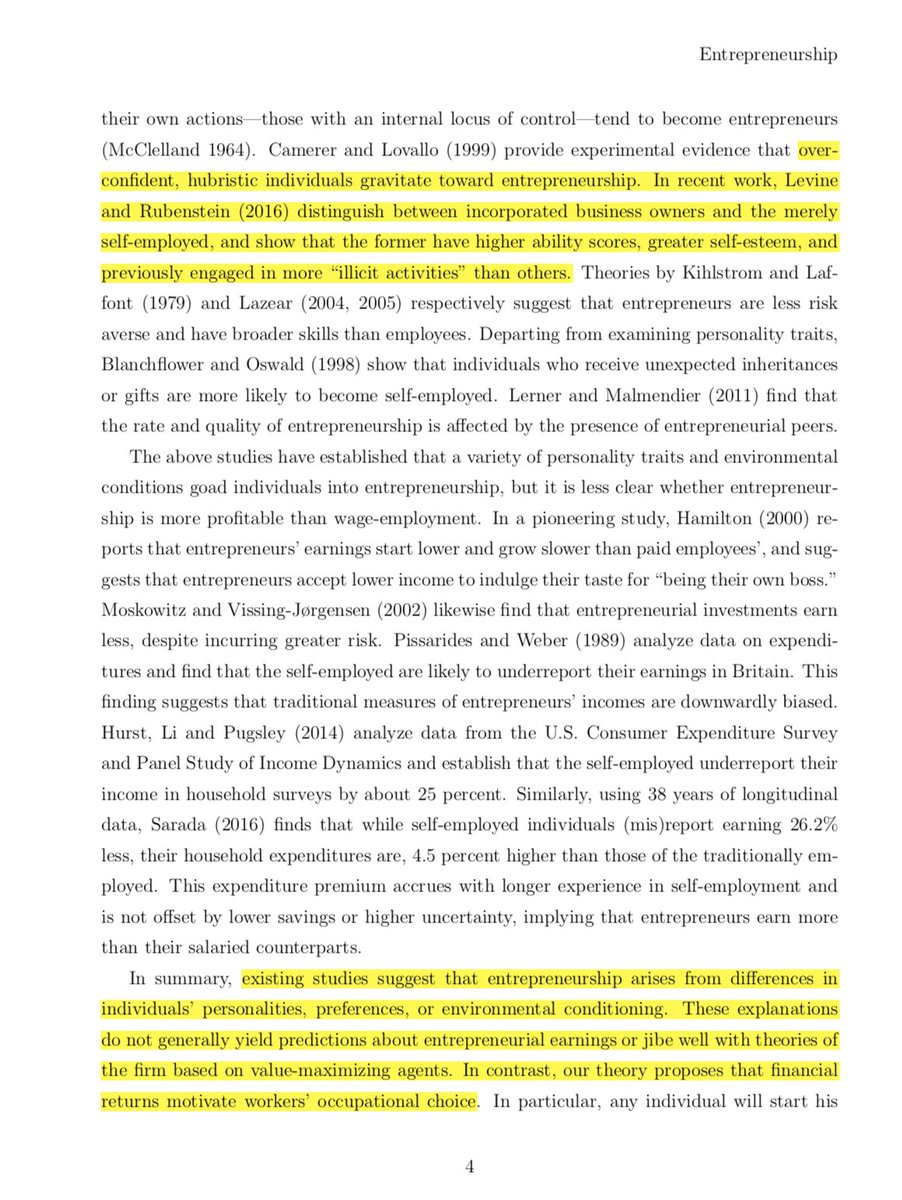 7/ This model focused on ONE key item:
*asymmetric information about ability*
--from a corner food vendor without a HS diploma to a high-tech founder with a PhD from MIT

...to predict WHO is more likely to SUCCEED as an ENTREPRENEUR... 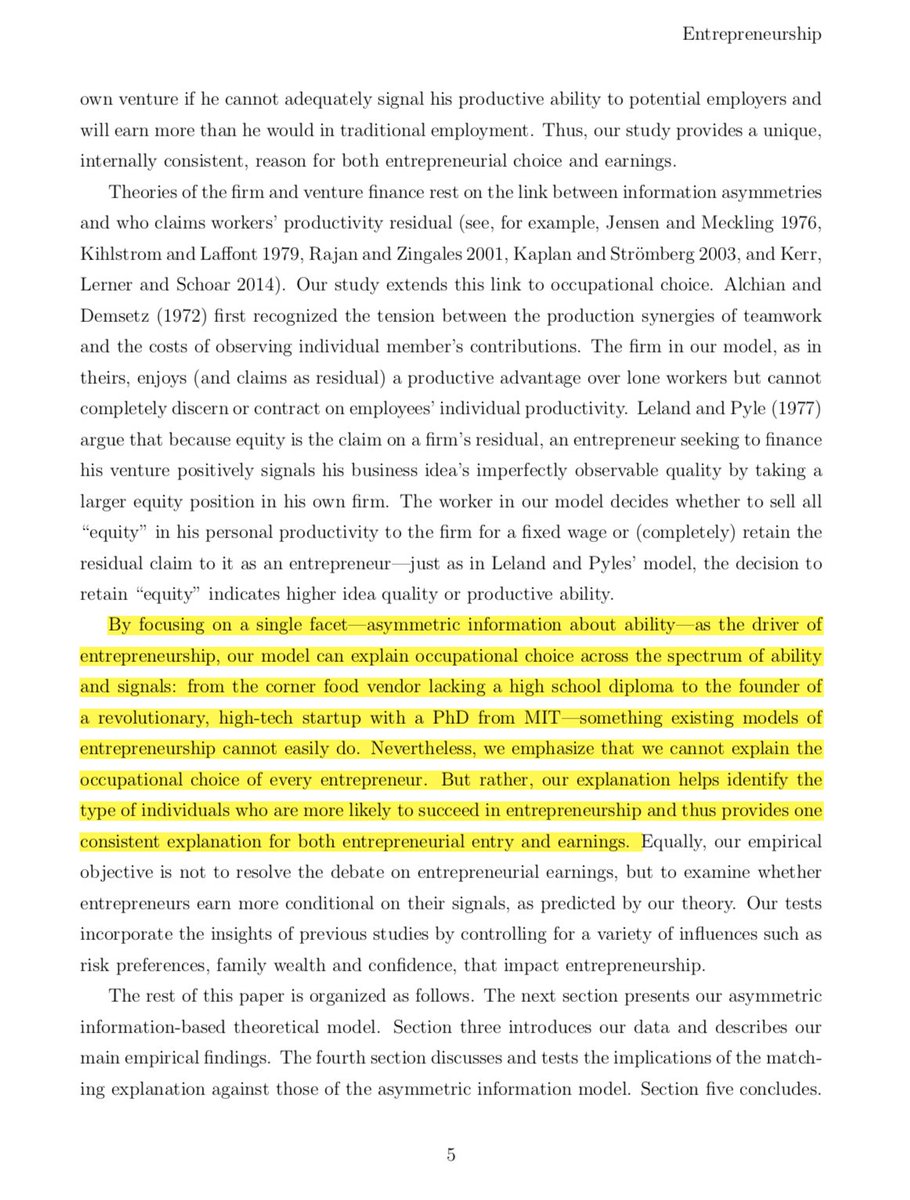 8/ They apply Akerlof's "market for lemons"
co's offer jobs based on observable SIGNALS
BUT better informed people believing they have more ability than they signal become FOUNDERS claiming more of residual value of their talent; flipping things:
founders=cherries
workers=lemons 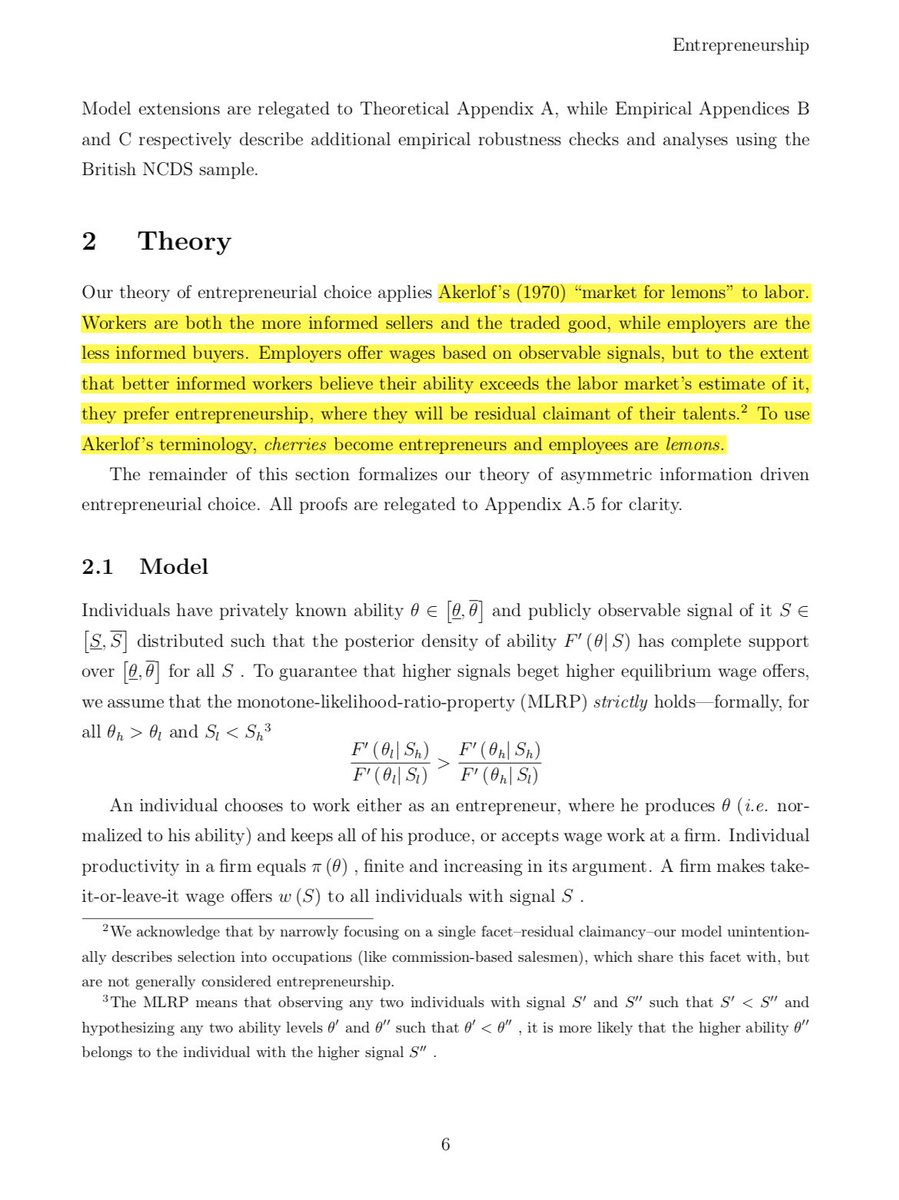 9/ KEY conclusion?
*Asymmetric info about ability* leads existing firms to employ "lemons"
Talented people without as much signal choose to be entrepreneurs
contrasting MUCH of social science 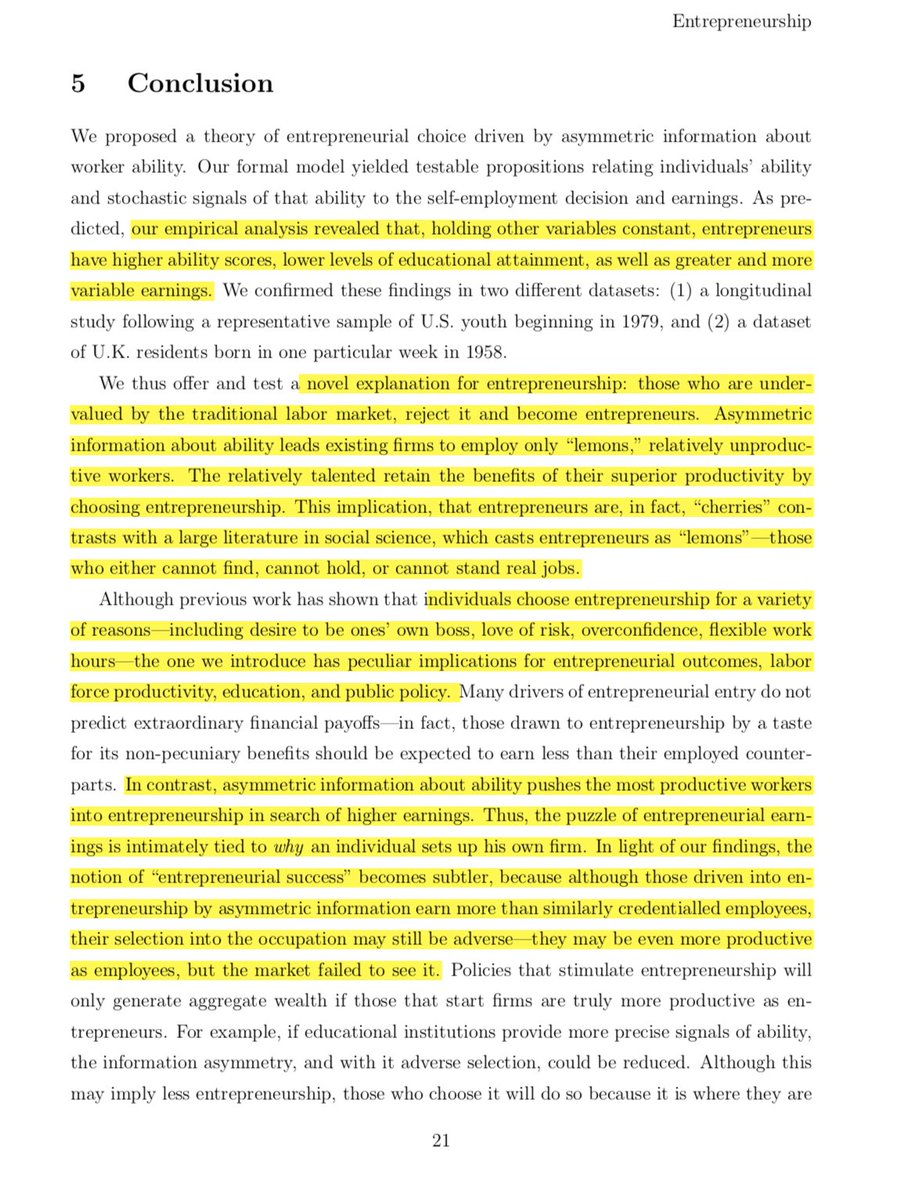 10/ So many stories of great IMMIGRANT founders, here's empirical logic WHY more become entrepreneurs(!):
IMMIGRANTS may have had "less credible ability signals" for "regular" jobs
+
Why friends/family are dominant source of $ at start when asymmetric info of ability is at max 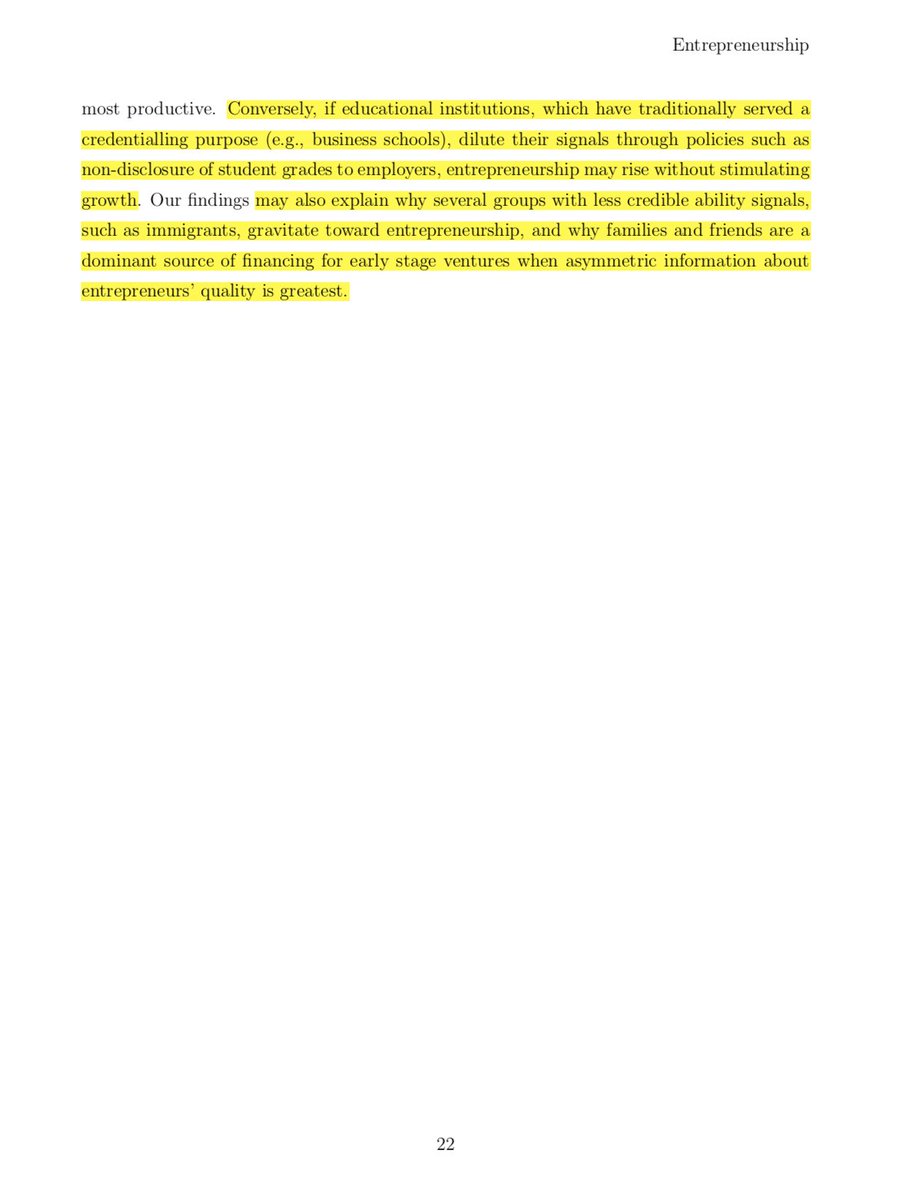 11/ Basically: Ode to the OUTSIDERS with something to prove any system that rejected them (or they believe might) and as Blake said...creates their own system so as to not be ensalved by another man's....