Eric Garland+ Your Authors @ericgarland Strategic analyst. Here for the Endgame and the next chapter beyond. May. 12, 2018 6 min read + Your Authors

Guys. It's time to talk about a major vector for propaganda that protected this Russian/Mob coup: journalists. But not real ones. 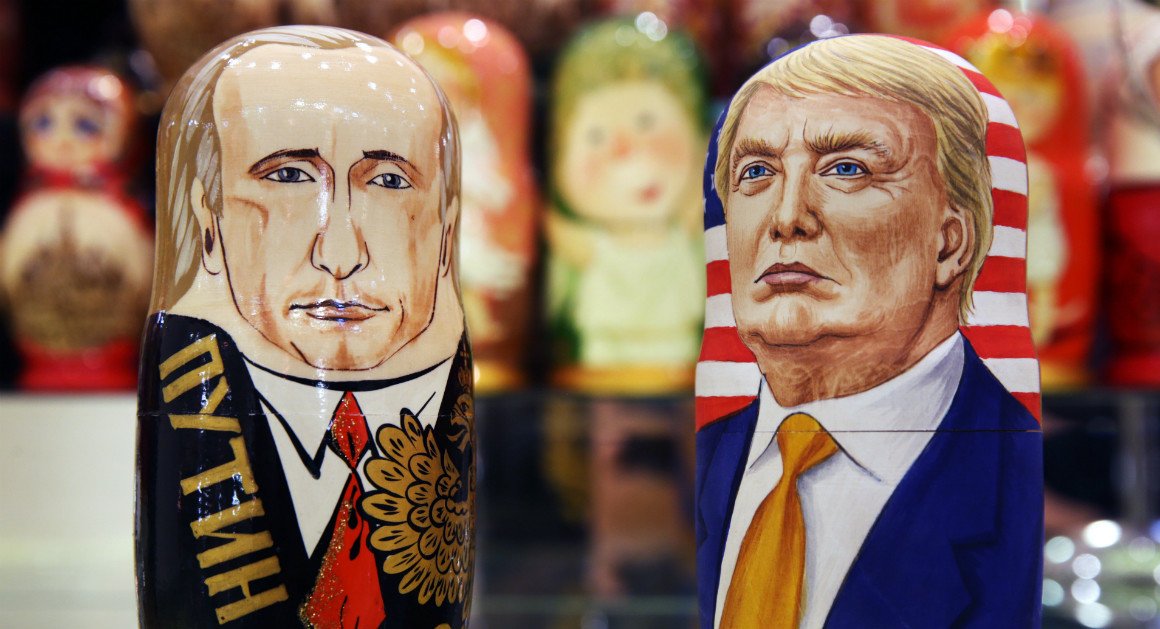 The cover up has come from "journalists" trustwashed to look like authorities who actually spread disinformation about national security, Russia, and our IC/LE's investigation.

In the past five years, many media outlets were commandeered through their capital structures and senior management, tied to people linked directly to foreign money or private equity, the funding of which is opaque. Those links may explain their Trump-Russia reticence. 🤨

These brands have trafficked a wide array of what information warfare experts might term disinformation. They appear to have coordinated in shifting the narrative away from basic facts that show the grave danger posed by the Trump coup.

This disinformation has been advertised under the rubrics of "digital culture" or "Web life" or "politics" - anything but national security.

This has allowed well-known brands to traffic content written by young professionals with no relevant expertise to flood social media feeds with misleading narratives, trustwashed with an air of authority that is absolutely unearned.

We now arrive at the moment when this interconnected mass of content will be shown to have acted as proactive PR to cover up the activities of the Global Mob.

Here's how they did it.

First, we must examine the pernicious role of opinion journalism in this day and age.

OpEds aren't necessarily bad - but one must see how their use has changed.

When @Kasparov63 writes about Russia, autocracy, or chess in an OpEd format, his opinion is illuminating as it is subjective. He knows his stuff. He presents his personal view. He therefore doesn't need 19 sources.

"Trustwashing" is what happens when mainly digital outlets present the opinions of some undistinguished 28-year old with a fine arts Masters in the exact same format as Kasparov to opine on geopolitics and intelligence operations of a foreign adversary.

See, Kasparov doesn't have to necessarily pull 19 sources like a less experienced journalist tackling a new, complex subject, because in reality he has many hundreds to thousands of subjects over decades of his life.

But by the same token, we wouldn't necessarily tune into Kasparov's fave recipes or vacation spots the way we would Anthony Bourdain's. (Though he probably has awesome tips, given his life experience.)

Under traditional opinion journalism, we let @Bourdain opine on the cuisine of Burgundy and @Kasparov63 talk chess entirely on their own merits.

Their opinions minus the rigor of multiple expert sources is entirely appropriate as such.

That format of an opinionated essay has been perverted to run interference for the Trump-Russia-Global-Mob coup.

Its offenders may or may not even now what they're doing. I suspect someone higher up does, though. It appears quite systematic over the last two years.

Here's a great example. Slate ran a piece from a British 20-something self-described "Marxist" five days after my Game Theory thread dropped. 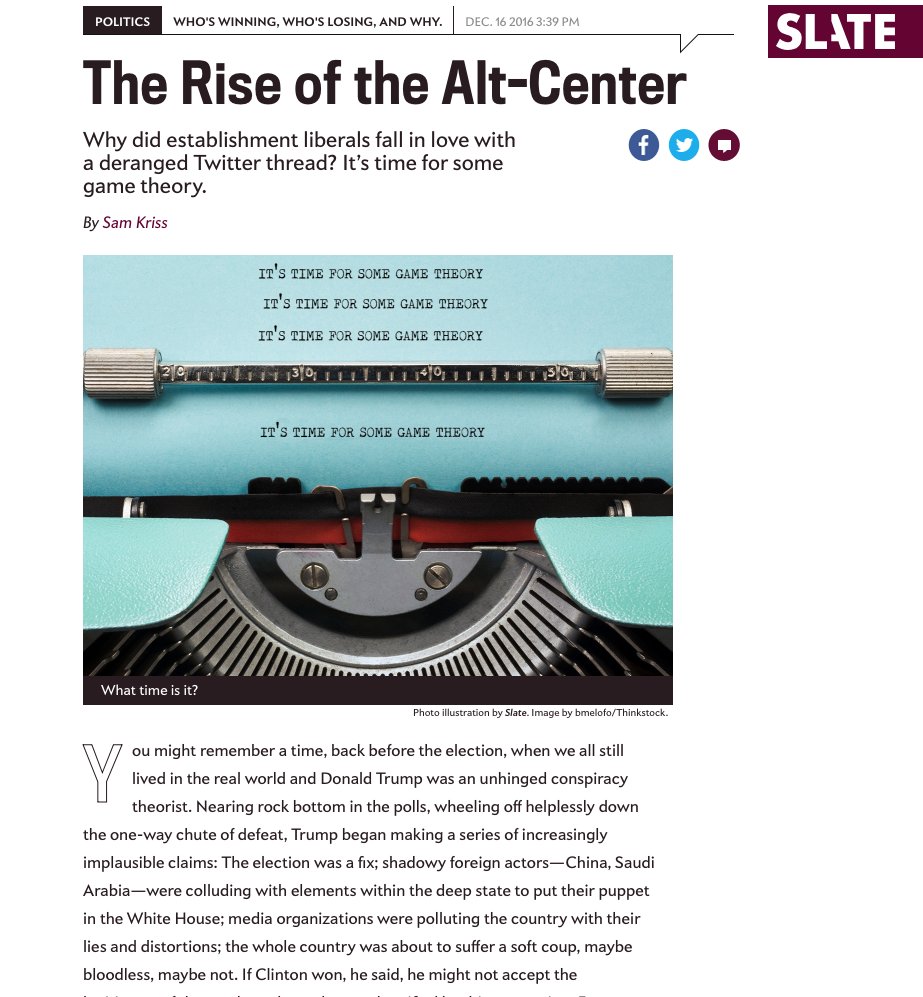 Sam Kriss - since run out of media for self-admitted date rape - posed as an expert on US politics, Russian intelligence, and my professional life.

The work is flatly defamatory to me personally, and dismisses the Russian influence on Western democracies entirely.

Slate's editors did not reach out for quotes. They did not fact check. When I asked them to correct basic factual errors months later, their staff did not respond.

I can only conclude that Slate's Jacob Weisberg and Julia Turner believe that all opinion journalism is of equal value, irrespective of professional rigor and decency.

Especially since they've allowed two other authors to do the exact same thing on the subject of Trump-Russia.

I researched the backgrounds of three of Slate's Russia skeptics. To my knowledge, none had any professional history of analyzing any of the subjects they were covering.

And yet their opinion journalism is presented as if it's potentially like Jim Clapper's or Sally Yates'.

This has been done across many, many outlets. And, curiously, they all seem to cross-link to each other's fact-check-free opinion journalism from non-experts.

This phenomenon raises many tough questions about the Fourth Estate, given the gravity of the current situation.

You can hear from the non-expert from Vox who "knew" that Trump-Russia was "like" Holocaust Denial.

Or that the guy from New Republic who writes about *haunted houses* of all thing and who said that the Russian influence on Western politics was pure "paranoia."

The New Republic will also treat you to a writer with two years experience as well as a Canadian expert in comic books who are both sure about what the US intelligence community does and does not know.

All marked as worthwhile "opinion journalism."

The Washington Post has accomplished the unusual feat of providing the quality reporting that has revealed some of Trump-Russia, but then, confusingly, opinion journalism calling the whole thing a misleading hoax.

An extra special treat is these same outlets covering up the scandal of the century then claiming that my five-minute of falling for the "Gorilla Channel" was the emblem of disinformation.

It'd be hilarious if it weren't angering: in the literal year our system was attacked by hostile intelligence agencies backed by nation-states, my five minutes of laughing ruined the entire network of IP-address-connected computers.

But they've highlighted something unintentionally.

There *is* a problem with fake information and fake expertise.

It's from digital media outlets slinging people with four years experience writing about "the Web" to discuss FBI counterintelligence investigations.

And I have dozens of examples.

Once the unprofessional, defamatory articles about yours truly topped 120 at the end of 2017, I did an extremely detailed analysis of every individual and company running disinfo about Trump-Russia.

The patterns are undeniable: there is an epidemic of propaganda.

And if this behavior is unwitting among top executives...I'll be shocked. 🤨

The number of media outlets currently losing money says that the consolidation was for reasons other than profit.

In many cases, the deeper connections are very provocative of *many more questions.*

As for the individual young journalists, well, they are individual, and young.

The people writing with such confidence about intelligence operations around the world seem to have been hand-picked to have no ability to realize that they were propelling disinformation, horseshit.

So: this system of news/information/analysis needs a cleanup. Formerly respectable brands need to be held to account. Unsparingly.

But what do WE do? As people who just want the truth?

Actually, that bit will be tough, for a while, but not impossible.

There are actually many fine professionals in the world of journalism.

Sadly, a lot have been sidelined in favor of more ethically malleable, younger, cheaper colleagues who would play this game without complaint.

How to recognize them, though?

Well, they're generally more in the space of "reporting" rather than "hot takes."

Look for the professionals bringing facts, dates, documents, and quotes from real experts.

THEY ARE OUT THERE STILL! HOORAY!

Look out for the reporters who simply, without fear or favor, report news.

Not identity politics. Not emotional hot buttons. Not the trendiest thing.

Who? What? When? Why? And context?

It's a GREAT format. Stupidly elegant, too.

Forget what it looks like? CBC, BBC, Australian media and many others have government controls on media that make the news less colorful, but a lot more trustworthy. France, Germany, and Netherlands too, if you've got the language chops.

And we must return to this style of news. Because PR-infected, faux-opinion journalism offered cover to this century's greatest criminals.

It cannot ever happen again.